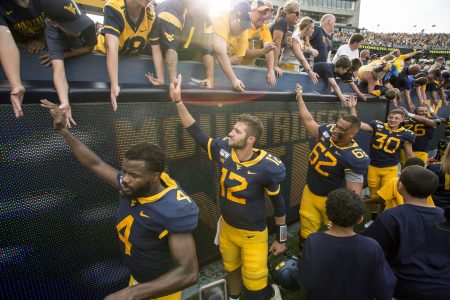 WHEELING — Neal Brown’s debut as WVU head coach was a successful, albeit nail-biting, one. His Mountaineers squeaked past FCS power James Madison, 20-13, on Saturday at sold-out Milan Puskar Stadium.

Things get no easier this week for WVU. The Mountaineers travel to Columbia, Mo., to face the highly touted, but so-far disappointing, Missouri Tigers in a noon start.

Mizzou entered the season with lofty SEC expectations, picked by many to finish second in the East. That changed dramatically this past Saturday when the Tigers were shocked at Wyoming, falling to the Cowboys, 37-31, although being a 17-point favorite.

Despite the loss, Missouri enters the game as a two-touchdown favorite over the Mountaineers.

WVU slipped past the Dukes despite a lethargic running game. The Mountaineers netted 34 rushing yards on 24 attempts.

“It’s got to get better,” Brown said about his team’s ground game during his weekly Big 12 coaches’ teleconference Monday.

“We’ve got to strain harder up front. I think our offensive line was getting on people but was not creating any movement, so we’ve got to strain. I think we’ve got to get more out of our tight ends. I don’t think our tight ends were a factor in the game and our running backs, I don’t think they read the run game very well. We didn’t set up our blocks and our quarterback has got to do a better job with his run fakes.”

The Missouri defense may prove the ideal tonic for the Mountaineers’ rushing woes. The Tigers surrendered nearly 300 yards on the ground in their loss to Wyoming.

Austin Kendall acquitted himself nicely in his WVU quarterback debut.

The Oklahoma transfer connected on 27 of 42 passes for 260 yards and two touchdowns. Those are quality numbers when you factor in the absence of an effective running game.

“We’ve got to do a better job around (Kendall),” Brown said. “We had three blown pass protections where we gave up big hits, and we had six drops in the game. I thought he did a commendable job.

“I thought he saw the game well. I thought he stood in the pocket and had some courage. I thought his decision making was good, but we’ve got to play better around him.”

Despite the shoddy play in many areas, Brown did see some positives in the opener.

“We made a lot of mistakes but I like how we handled adversity,” Brown said. “Our special teams play was a huge factor and our red zone defense showed up.

“Offensively, it was a poor performance overall and we lacked physicality but we had zero turnovers. We will have our hands full this week but I expect us to play a lot better.”

Barry Odom is Mizzou’s head coach. He took the reins in 2016. Odom guided the Tigers to an 8-5 mark last season.

“Obviously not the start that we were anticipating there or looking for our first game. Ultimately we didn’t play well enough as a team to win the game,” Odom said during his Tuesday press conference. “It’s a very elementary statement, as you look and digest and go through it. I would say credit to our opponent. I thought that they they did play well enough as a team.

“And I’ve mentioned a number of times that our margin of error is very, very slim. But that’s OK. We understand who we are and any game that if we will prepare the right way and then we will go execute, any game that we’ve got on our schedule will be decided in the fourth quarter. And that’s who we are as a team.”

The biggest problem Missouri presents to WVU may be its quarterback in Kelly Bryant. The Clemson grad transfer is a dual threat. Bryant passed for 420 yards and two TDs in the setback at Wyoming.

The Tigers, however, possess some other offensive weapons.

“Kelly Bryant is an excellent quarterback but they also have two good running backs,” Brown said. “Their tight end is an All-American and they have a lot of experience on the offensive line.”

Odom, meanwhile, had praise for Kendall.

“I know he throws well. He’s an extremely talented passer. They didn’t run him as much Week 1, which he’s got the ability to do in our studies,” Odom said. “He throws a really good ball, can attack down the field. You know, it seemed to me they want to attack, you know, six to 10 times a game it looks like downfield. And so he throws a really good the ball. He is going to be a presence, seems like he’s a mature competitor.”

Although WVU may have looked less impressive than many fans would have liked, the bottom line is the Mountaineers prevailed while playing through some adversity. That bodes well for a young team.

∫ Brown tabbed Union Local’s Colton McKivitz as the team’s Lineman of the Week. The four-year starter graded out at 95 percent.

∫ Redshirt freshman Sam James was one of the bright spotlights in the win over JMU. He caught six passes for 32 yards.

∫ Saturday’s game will be televised on ESPN2.

∫ This is the seventh meeting between the two schools on the gridiron. Each has won three games.

∫ The Mountaineers have forced a turnover in 12 straight games.