WVU will travel to Norman to face 6-0 Oklahoma 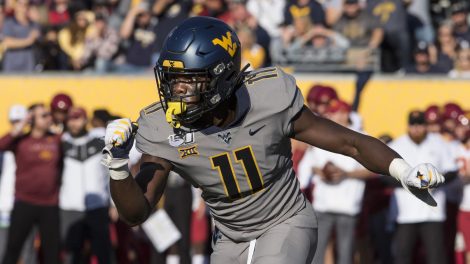 MORGANTOWN — To say West Virginia has its work cut out for itself Saturday is understating the obvious.

The Mountaineers travel to Norman to face 6-0 Oklahoma. The Sooners are rated No. 5 in both major polls and enter the noon start as whopping 33-point favorites.

Oklahoma is riding high after beating Texas, 34-27, in last Saturday’s Red River Showdown game in the Cotton Bowl. The Longhorns, meanwhile downed the Mountaineers two weeks ago in Morgantown.

Oklahoma presents a major challenge anytime. But WVU is reeling from two straight losses and has a major question mark at quarterback. Starter Austin Kendall was injured in the first series against Iowa State last Saturday and did not return.

The junior from Orlando completed 18 of 24 passes for 140 yards with one interception while engineering one scoring drive late in the first half. However, the WVU offense was lifeless in the second half, failing to dent the scoreboard.

WVU coach Neal Brown said Kendall was “questionable” for this Saturday’s game. Brown noted the Oklahoma transfer will not start unless he is “100 percent.”

If Kendall cannot go against his former teammates Saturday, Allison is the likely starter. But Brown has another option in Trey Lowe, a redshirt freshman.

“We felt Jack gave us the best chance a week ago,” Brown said in his Tuesday press conference. “We have a plan with the quarterback position if Austin can’t go. It is not something I want to sit up here and talk about.

“If Austin can’t go, we will go through with that plan. Trey is getting better. But we thought Jack gave us the best opportunity Saturday.”

“We’re experiencing some growing pains. I think that is obvious,” Brown said. “I think our kids are playing with great effort. Our execution and playmaking is not what it needs to be.”

The Mountaineers will be facing a much-improved Sooners defense. The unit was a virtual sieve last season. Riley, however, hired Alex Grinch away from Ohio State and the new defensive coordinator has made an immediate impact.

Despite being lopsided favorites, Oklahoma head man Lincoln Riley is taking the Mountaineers as serious threats.

“Good football team,” Riley said when asked about WVU during Monday’s Big 12 coaches’ media teleconference. “Obviously, there are a lot of changes for them. The coaching staff is completely different. They lost a lot of great players from years past. But you can see there’s certainly still a lot of talent there.

“They’ve been really disruptive there defensively. I think the most yards they’ve given up has been slightly over 400. Coach (Vic) Koenning does a tremendous job defensively. He’s been doing it for a long time — and at a high level for a long time.”

Oklahoma packs offensive clout. The Sooners rank first nationally in total offense, racking up 621 yards per game. They are third in scoring offense with 50.2 points.

Alabama transfer Jalen Hurts is the catalyst of the high-octane offense. Hurts has dramatically improved his passing skills under Riley’s golden touch.

Despite the uncertainty that surrounds the WVU quarterbacking situation, Riley is expecting a stern home test.

“I’ve got a ton of respect for Neal Brown and (offensive coordinator) Matt Moore, the way those guys operate, the way they coach offense,” Riley said. “You see they’ve progressively gotten better throughout the year. We’ve had a lot of battles with West Virginia through the years. This will be another.”

∫ The Sooners outlasted the Mountaineers in a wild 59-56 shootout in Morgantown last year.

∫ WVU has recorded 17 sacks this year, placing it third in the Big 12.

∫ Oklahoma is the only team in the nation with at least 19 rushing TDs and19 passing TDs.

∫ FOX will be televising the game.

∫ Junior wideout Tevin Bush plans to enter the transfer portal. He wants to be closer to his New Orleans home.

∫ VanDarius Cowan is out for the balance of the season with a knee injury.