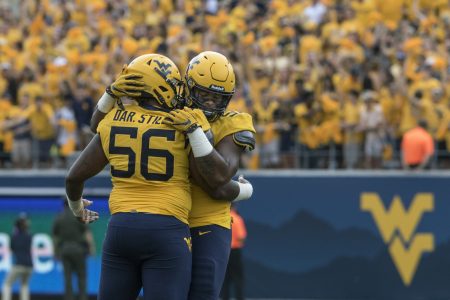 FILE - In this Sept. 14, 2019, file photo, West Virginia defensive linemen Darius Stills (56) and Dante Stills (55) hug during an NCAA college football game in Morgantown, W.Va. Dante Stills and his older brother, Darius, are among the Big 12's sack leaders and they'll be looking to cause more disruption when West Virginia hosts No. 11 Texas on Saturday. (AP Photo/Raymond Thompson, File)

The Stills family is once again creating problems on defense at West Virginia.

Linemen Dante Stills and his older brother, Darius, are among the Big 12’s sack leaders and they’ll look to cause more disruption when Sam Ehlinger and No. 11 Texas take on the Mountaineers on Saturday.

Their father is former all-Big East and NFL Pro Bowl linebacker Gary Stills, who played at West Virginia from 1996 to 1998.

The elder Stills had 26 career sacks, tied for the second most in school history. He had 12 in 1997, including four in one game against Marshall.

His sons have a long way to go before catching him.

At least they’re making a dent.

“It’s very special because it’s very rare you get to play with your brother at this high of a level,” Darius Stills said. “Whenever I see him make a play I get excited and vice versa. It’s surreal, honestly.”

Dante Stills, a 6-foot-3, 303-pound sophomore, has started the last two games and has four sacks, one more than he had all of last season in a backup role.

Darius Stills blocked a field goal in the opener against James Madison. He has three sacks and three starts this season. The junior, who is 2 inches shorter and 10 pounds lighter, wasn’t as heavily recruited as his younger brother out of Fairmont Senior High School, about 15 minutes from West Virginia’s campus.

Dante Stills received scholarship offers from West Virginia and other schools as a high school sophomore, but the Mountaineers didn’t go after Darius until late, and that was after he’d already committed to Rutgers, believing an offer from West Virginia would never come.

Darius Stills has been trying to make a point since.

“He’s overlooked his whole life for no reason,” Dante Stills said. “I feel like he has something to prove and I feel like he will prove it.”

Keeping tabs is Gary Stills, who played 10 NFL seasons, including seven with the Kansas City Chiefs. He’s a regular at his sons’ games and plans to be in Morgantown for homecoming Saturday.

Gary Stills will chime in every now and then when he sees a football mistake. But for the most part, he prefers to stay in the background.

“That’s one thing that I put an emphasis on more,” Gary Stills said. “I’m your dad. First and foremost, I’m your dad — who knows how to play football.”

The best advice the sons get don’t always come from talks. They come from their father’s playing days.

“People expect me and Dante to be like our dad in some sort of way,” Darius Stills said. “But we watch film on our dad also. You watch your dad because you’re trying to get to this level. Once you’re at this level he don’t really show you film anymore. He shows you what you should do in order to be a pro. Instead of studying scheme, you’re studying your individual guy. That’s just the kind of tips he gives us now.”

West Virginia coach Neal Brown said he is looking for the pair to be more consistent. He said Darius Stills had his best game Sept. 21 in a 29-24 win at Kansas.

Dante Stills has “probably made more big plays for us defensively than any player on that side of the ball,” Brown said. “We’re just pushing him to be at his best all of the time. I think he can strain and play at a higher level.”

Longhorns center Zach Shackleford will be dealing with them a lot on Saturday, just like he did last year when the Mountaineers won 42-41.

“They are really good at getting into the line of scrimmage. And they’re really good with their hands, both of them,” Shackleford said. “They’re up there. They are very technique savvy and sound. They have some experience now.”