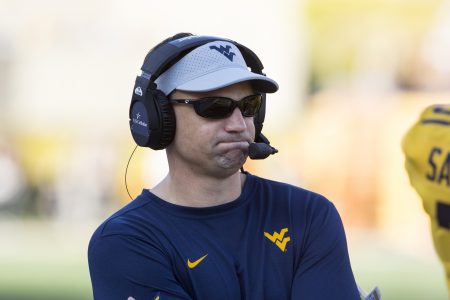 MORGANTOWN — All games are big when you have a 12-game schedule. Some, however, take on more importance than others.

Such is the case for WVU this Saturday.

The Mountaineers play host to a quality Iowa State squad. The Cyclones are 3-2 after downing TCU six days ago.

WVU, meanwhile, is coming off a solid but unsuccessful performance against 11th-ranked Texas. The Mountaineers trailed 21-17 after three quarters only to eventually fall, 42-31.

The loss dropped Coach Neal Brown’s young charges to 3-2 overall and 1-1 in the Big 12. The Iowa State game is pivotal as it is a gateway to a pair of tough road games: Oklahoma and Baylor. The Sooners and Bears are both undefeated.

Six wins and a bowl bid would signal a successful maiden voyage for Brown in Morgantown. WVU was picked to finish eighth in the 10-team conference.

“Brock Purdy is playing real well. I am very impressed with him. He is in the conversation for the best quarterback we have played,” Brown said during Monday’s Big 12 coaches’ teleconference. “They (Iowa State) are playing at a very high level.”

Purdy is a sophomore who injected life into the Cyclones offense after becoming a starter midway through his freshman campaign.

Purdy ranks fifth nationally in total offense at 356.2 while topping the Big 12 in passing yardage (315.6). He is 7-2 since becoming a starter against Big 12 foes. Moreover, he is only one of four players in FBS this season with multiple games of at least two passing TDs and two rushing TDs.

While Brown spoke highly of Purdy, he also had praise during Monday’s teleconference for his quarterback Austin Kendall.

“Zero questions about his toughness,” Brown responded when questioned about Kendall’s health. “He missed one practice last Sunday but practiced the rest of the week. He is a tough guy. He gave us a chance to win Saturday.”

The Oklahoma transfer completed 31 of 46 passes for 367 yards and three TDs. He was picked off four times.

Iowa State opened the season slipping past Northern Iowa, 29-26, before falling to rival Iowa, 19-18. The Cyclones bounced back to rout Louisiana-Monroe, 72-20, only to fall to Baylor, 23-21. Iowa State is coming off its best game of the season with its 49-24 over a solid TCU bunch.

The Cyclones are 10-point favorites over the Mountaineers.

“WVU is a great opponent. They are playing with a lot of confidence,” Campbell said during his Tuesday’s press conference. “I am impressed with Coach Brown and his staff and what they do. They play really hard and are a skilled team.

“They have had some nice wins. This is a great challenge for us. Morgantown is a hard place to play.”

Purdy has a talented receiving corp, making his life easier and more productive.

Deshaunte Jones is a productive wide receiver, hauling in more than seven receptions per game this fall. He has three 100-yard receiving games.

Jones is complemented by tight end Charlie Kolar. The sophomore has landed 20 passes.

“Iowa State is coming off a big win. Matt Campbell has done a great job building that program,” Brown said. “They play tough and physical and they are very consistent. Since he has been there they have not lost a game by more than 14 points.

“Defensively they have a unique and creative scheme. They are the architects of it. It is tough to prepare for. Offensively, they have only had two three-and-outs all season. Purdy is special. This is a huge game for us. We need our fans. They created a great atmosphere against Texas. We got a lot of great feedback about them.”

The Iowa State defense is directed by a coach with Ohio Valley ties. Jon Heacock has served as the Cyclones’ defensive coordinator the past four seasons.

Heacock is a Muskingum University graduate. He was an assistant on the Steubenville Big Red state championship team in 1984 for Reno Saccoccia. Heacock then landed at West Liberty, serving as the Hilltoppers’ defensive coordinator from 1985-87, proving a springboard for coaching stops at Youngstown State, Michigan, Purdue, Indiana and Toledo.

His Cyclone defenses have ranked second and first, respectively, in the Big 12 the last two seasons.

∫ Kendall leads the Big 12 in pass completions per game (25).

∫ WVU has recorded 14 quarterback sacks on the season, second most in the Big 12.

∫ Next week’s game against Oklahoma in Norman will be a noon start.

∫ The Iowa State defense has yielded only three rushing TDs all year and is allowing 3.2 yards per rush.

∫ Iowa State has gained 400 yards of total offense in each of the first five games of the season for the first time in school history.

∫ The Cyclones are 8-0 in the month of October the last three seasons.