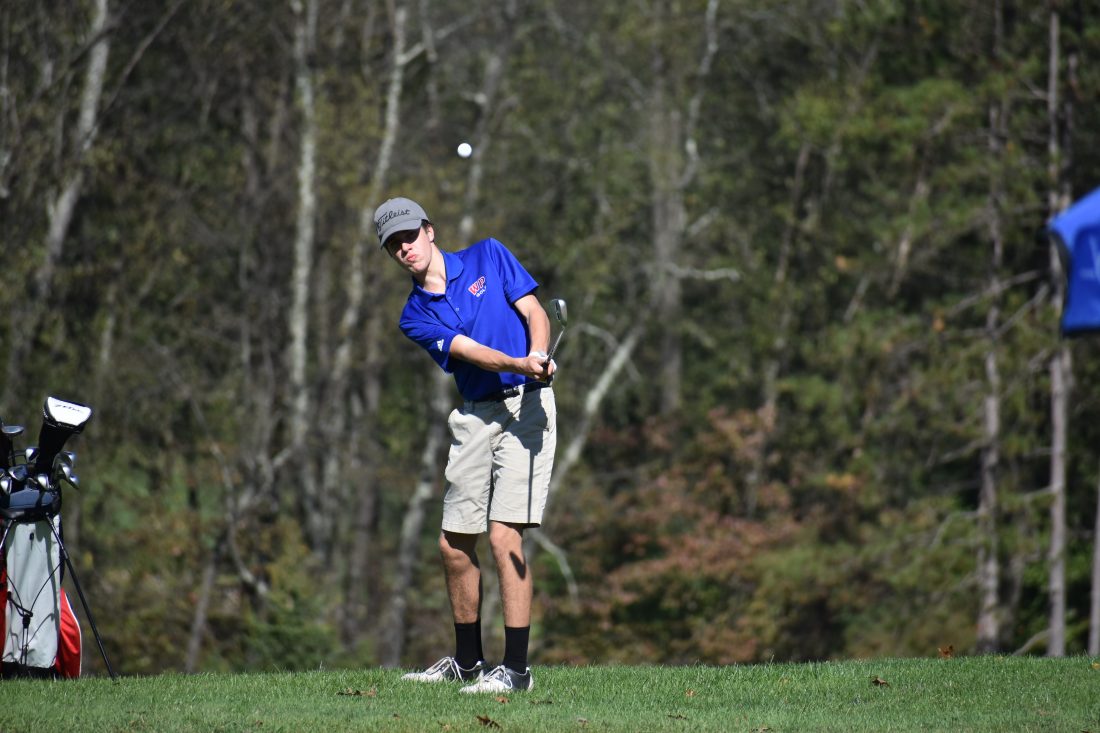 Photo by Cody Tomer Wheeling Park’s Owen Leary chips a shot toward the green during Tuesday’s opening round at Oglebay’s Jones Course for the state tournament.

WHEELING — As the wind swirled around Oglebay’s Jones Course on Tuesday, the best prep golfers in West Virginia went toe-to-toe with the conditions and each other.

When the dust settled, it was Wheeling Park sitting in first place in Class AAA at the end of Day 1 with a score 245.

Huntington and Capital are both on Park’s heels as they are knotted at 247 and Greenbrier East came in at 254.

Brooke’s Ryan Bilby is the Class AAA leader in the clubhouse after the opening round.

The junior Bruin fired a 74.

Washington’s Ethan Hardy is second at 76 and Park’s Noah Seivertson is third with a 77.

Wheeling Park’s James Salvatori turned in an 83 but it was No. 4 golfer Owen Leary who made the difference for the Patriots with a card of 85.

“James needs to get a little bit lower.

“He hit some bad shots early but corrected them in the afternoon.”

With defending champion George Washington falling at the regional tournament, it leaves the door wide open for any of the top contenders to win today.

“I’m a little surprised to be leading with a 245,” Headley said. “We’ll take it but it’s going to be a battle. When the No. 1 team in the state didn’t make it to the state tournament, it opened everybody’s eyes up and gave everybody else in the tournament a chance. It’s still wide open.

Seivertson began his day on the back 9 and started slow but came alive on the front 9.

“I came to the front 9 and turned it around,” Seivertson said. “I started out 3-under going into the seventh hole. I couldn’t ask for a better turnaround.”

Aside from a double-bogey on the ninth hole, Seivertson enjoyed his run down the stretch — which is his game plan heading into today’s final round.

“I’m just going to go out and have fun,” Seivertson said. “I felt like I was pressing on the back 9 but once I got to the front I was relaxed, having fun and making putts.

It was the opposite for Bilby, who got off to a fast start with a birdie on 10.

He made his final shot of the day count as he drained a birdie on 9 to pad his lead.

However, it wasn’t an easy day for anyone with the high winds wreaking havoc on the course.

“Sometimes there’s not much that you can do,” Bilby said. “I did what I could. I’ll take this two-shot lead into (today).

“I’m not going to play defensive. When you are four back you have to go for everything but I’m going to play smart and aggressive at the same time.”

Webster County’s Rigel Wilson carded an 80 to secure the individual lead with Magnolia’s Trey Blain sitting in a tie for 10th at 89 and Wheeling Central’s Justin Doerr tied for 20th at 94.

Fairmont Senior leads Class AA with a 257, followed by North Marion at 268.

Shady Springs’ Todd Duncan is the overall leader with a 72.