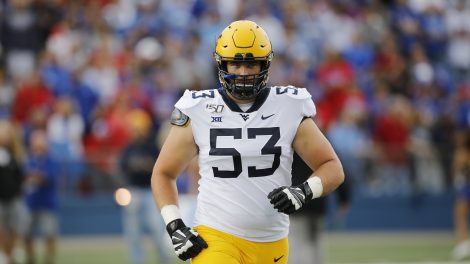 MORGANTOWN — Some see it as a monumental challenge. Others view it as a golden opportunity.

No matter how you look at it, WVU is playing host to nationally ranked Texas on Saturday. Kickoff is set for 3:30 p.m. at Milan Puskar Stadium in the nationally televised game.

The Mountaineers come into the contest fresh, enjoying a bye week after pocketing a 29-24 win at Kansas. Coach Neal Brown’s charges are 3-1, the lone blemish coming at Missouri.

Texas, meanwhile, is ranked 11th in this week’s collegiate rankings. The Longhorns’ lone blemish was inflicted by LSU in a wild shootout in Austin.

Texas also enjoyed a bye week last Saturday. The Longhorns are 10-point favorites over the Mountaineers.

WVU is also 1-0 in conference play via its win over the Jayhawks. The Mountaineers have also defeated James Madison and North Carolina State.

WVU was predicted for eighth in the 10-team league. Texas, meanwhile, was tabbed for second behind Oklahoma.

Few expect the Mountaineers to be among the Big 12 elite this year. Brown took over a young and rebuilding squad with many questions marks.

A successful season is viewed by many as one in which the Mountaineers can post a winning record while gaining a bowl berth. An upset over the Longhorns would greatly spike those expectations.

“If you’re not motivated for this game, coming off a bye week, playing on national television against one of the top programs in the country,” Brown said during the Big 12 conference call on Monday. “I don’t think we’ll need a bunch of motivation.

“We’ve got to do a really good job on first downs and try to get them behind the chains. We’ve got to force some takeaways. I think that’s going to be critical.”

Texas possesses a high-octane attack, averaging 41.8 points a contest. The Longhorn catalyst is Sam Ehlinger. The dual-treat quarterback is a Heisman Trophy candidate.

“Slowing them down is the key. I don’t know if you’re going to stop them,” Brown noted. “They’re super talented. Their wideouts — multiple guys — are dangerous. And they’ve been able to run the ball effectively.”

Austin Kendall is the triggerman of the offense. The Oklahoma transfer has completed 94 of 144 passes for 871 yards. He has tossed six TD passes while being picked off on three occasions.

The Mountaineers’ rushing attack is showing signs of life. WVU managed 70 total yards on the ground after two games. With stronger play on the O-line, anchored by Union Local product Colton McKivitz, the team is now averaging 107 per game.

Kennedy McKoy is WVU’s leading ground-gainer. He has gained 168 yards while finding the end zone on three occasions. Leddie Brown is next with 107 yards and one TD.

Sam Janes is a developing star at wideout. He has snared 26 passes, scoring once.

“It was nice to have a week off. We got some rest,” Herman said during Monday’s press conference. “Our developmental players got more reps and our older players got better.

“For a lot of our young players this will be the first time they have been on a plane and also playing in a hostile environment. I have a lot of respect for Coach Brown. His teams plays hard and physical. Schematically they like to get their athletes in space while defensively their secondary does some different things. This will be a good test for us on both sides of the ball.”

Brown heaped much praise on the Longhorns during his Tuesday’s press conference.

“Texas is a very impressive team. They have done a really good job of recruiting. They have great length and team speed,” Brown said. “They are the best offense we have played and have one of the best offenses in the country. Ehlinger is special. He is a tough kid who has improved his passing. His personality is what the team has taken.

“Defensively, they are multiple and very huge on the defensive line. They all go at least 290. They have a size advantage across the board against us. It is gonna be a great atmosphere. We need our crowd and our students.”

McKivitz also spoke at Tuesday’s presser. He is relishing the chalennge that Texas presents.

“Every game is a statement. This week is another statement we need to make and prove to people we are better than what people think,” McKivitz said. ”

∫ WVU is celebrating Homecoming this weekend. The Mountaineers are 53-33-3 in homecoming games.

∫ Highly touted Alabama transfer VanDarius Cowan, a former four-star recruit, is finally going to see the field for WVU after a four-game suspension. He will get snaps at bandit position.

∫ The Mountaineers lead the all-time series against Texas, 5-3, including last year’s thrilling 42-41 win in Austin.