Capital Upsets Wheeling Park In the First Round 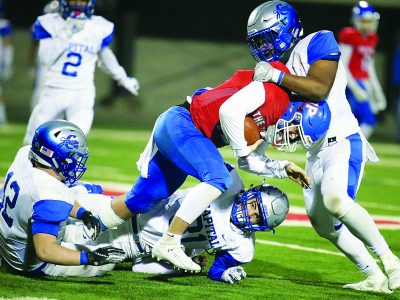 WHEELING — Wheeling Park is known for its electric offense and fast, skilled playmakers.

Friday at Wheeling Island Stadium, it was Capital that was responsible for the offensive onslaught.

And for Wheeling Park, that meant a first-round playoff exit.

The No. 11 seed Cougars piled up 547 yards of offense and held No. 6 Wheeling Park to its lowest scoring output of the season with a 45-21 upset in the first round of the West Virginia Class AAA playoffs.

“Capital is athletic and we just didn’t click offensively,” Wheeling Park coach Chris Daugherty said. “I don’t know if we ran a functional football play except for the two we scored on to start the game.

“For the most part, we have had our hiccups, but offensively we have been pretty steady. I hate saying it was not our night, but nothing went right and it kinda snowballed. We had some plays in the second half and I thought we were going to get back in there, but credit to (Capital). They made some plays, too.”

Wheeling Park (8-3) hurt itself with 15 penalties for 99 yards, many of which were false starts and illegal shifts that virtually took away the running game and made the Patriots one-dimensional.

Wheeling Park is usually a balanced offense, but Friday ran 19 running plays for 38 yards, compared to throwing the ball 32 times.

“We haven’t done a lot of that, but (Friday), for whatever reason, we had our share of penalties that put us in a hole,” Daugherty said. “It is tough to call plays out of third-and-20 and second-and-19. It is hard to get out of that stuff, especially against a team that is so good in the back end.

“They can soften up and don’t have to gamble and it is tough to go get 19 yards.”

Capital (6-5) never trailed, opening the game with drive that culminated in a 23-yard field goal from Logan Spurlock.

Chance Knox put the Cougars up 10-0 with a 4-yard touchdown run in what would be a theme on the night.

Knox scored his second TD on the ensuing Capital possession to regain the two-score lead. Tay Calloway added an 18-yard rushing touchdown later in the quarter as the lead was built to 24-7.

Wheeling Park has been a team that rallied from deficits all year, coming from behind to steal wins against Zanesville, Morgantown and Parkersburg South.

Dunlevy found Mitchell again for a 41-yard touchdown on a wheel route just before intermission and the Patriots opened the second half with a Dunlevy to Xavier Morris 37-yard catch and run to cut the deficit to three.

All the momentum had shifted to Wheeling Park. Amazingly, that touchdown at 10:44 of the third quarter was the last time the Patriots scored this season.

Capital scored on its first second-half possession as quarterback Evan Landers lofted a pass to Calloway and he fought his way to the pylon for a touchdown.

After a Patriots three-and-out, Knox found a hole on the first play of the drive and went 85 yards untouched for a touchdown to make it 38-21.

“That was huge and it killed us,” Daugherty said of Knox’s run. “That was the biggest play of the second half. We could just never get over top of them. We got within three and then had our share of mistakes again. We couldn’t weather that storm.

“Capital is a good football team. We are probably a hair away from being them and 5-5. They are not as bad of a team as you would expect a 5-5 team to be. But that is football.”

Calloway added a 7-yard run to start the fourth quarter to complete the scoring.

The Cougars rushed for 303 yards with Knox going for 153 yards and three scores and Calloway adding 137 yards and two touchdowns. Landers passed for 244 yards and a score.

Capital advances to face the winner of today’s matchup between No. 3 Spring Valley and No. 14 Hurricane.

“I’m excited for the kids because Wheeling Park is a good team and we knew that,” Capital coach Jon Carpenter said. “We knew it was going to be hard. I told them to love each other and they stuck together.

“The defense did a great job. We changed up what we did and didn’t let them play 7-on-7 against us. We tried to blitz them and the three we gave up we just busted a call. The kids played hard and I wish I could say it was the playcalling or something like that, but credit, it goes to all those players.”