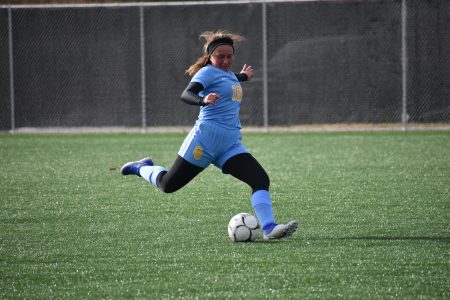 BECKLEY — Oak Glen dominated the first 20 minutes. Taylor Allison put the Golden Bears up 1-0 in the 13th minute. Everything was going their way.

But as happens so many times in soccer, all it takes it one bad thing to happen and things can spiral out of control.

And that is what unfortunately befell Oak Glen on Saturday at Carter Field.

Two unlucky bounces led to Oak Glen falling behind and the floodgates opened from there as Charleston Catholic scored four second-half goals to earn a 5-1 victory that earned it the W.Va. Class AA/A girls’ soccer state championship.

It is the first championship for the Irish since 2015, ending a string of three consecutive losses in the title game.

“They were the best team down here,” Oak Glen coach Ryan Wells said. “Charleston Catholic brought that physicality. I felt like the counters were there with the adjustments.

“We moved some girls around, but there were mismatches that were evident. And they took advantage of them. We made them earn a couple, but they were the better team.”

A day after Oak Glen (18-3-2) was dominated in time of possession by Winfield, the Golden Bears came out the gate attacking more and took it to Charleston Catholic (22-1).

The Golden Bears controlled time of possession and put the pressure on the Irish defense.

When they were awarded a free kick from about 40 yards out, Allison sent a rifle toward the net that somehow found its way through a host of players and into the goal for a 1-0 lead.

After that, it was all Irish.

Charleston Catholic put the pressure on, but Oak Glen’s bend-but-don’t break defense did the job keeping the Irish forwards out the of the box and into long shot attempts.

Just when it looked like the Golden Bears would enter the locker room at halftime with the advantage, Charleston Catholic got the lucky break it needed.

A long shot by Bella Cinco was knocked away by a diving Oak Glen goalie Alexa Andrews. Unfortunately for the netminder, she pushed it off the post, only to have the ball bounces back, deflecting off Andrews and in with 34 seconds before halftime.

“We started playing passive,” Wells said. “In the formation we were in, to possess the ball as much as we did was unheard of. Giving up that late goal before half, there was definitely a momentum shift.”

And in the second half, it was much of the same. The Irish defense held Oak Glen in check, limiting the Golden Bears to three shots.

With all the pressure Charleston Catholic was putting on the Oak Glen defense and Andrews, it was just a matter of time.

And with that, another unfortunate event for Oak Glen.

Shannon Karr’s corner kick in the 55th minute was knocked into the net by an Oak Glen defender, an own goal that gave Charleston Catholic its first lead.

And much like they did Friday in a semifinal victory against Bridgeport, once the Irish get the lead, they poured it on.

Annie Cimino headed one in five minutes later to all but guarantee Oak Glen would be denied its first state soccer title.

Ashley Green added the final goal with 1:02 left to complete the scoring.

“The (own goal) wasn’t demoralizing, it’s soccer, it’s not the end of the world,” Wells said. “You make teams earn goals and if they are going to beat our defense and beat Lex, it is going to have to be a freak thing. It was two goals that fell against us this year that hadn’t all year.

For Charleston Catholic coach Amy Mullen, it was a weight lifted off her shoulders after coming up short the previous three seasons.

“I knew that as long as we were patient, it would start turning for us,” Mullen said. “(Wells) coached well. He had five people in the box, man-marked Lindsay. To put a free kick in during the few minutes put us our heels, but it was what we needed.

“(The own goal), you hate to see that. But that got us fired up and we started doing it ourselves. We are a second-half team and it showed. It took us a while to get going. I don’t think we were ready and we had to shake off the jitters to know we could get this done. We did it little by little.”