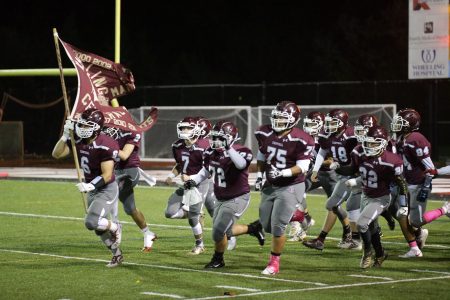 To get there, it won’t be an easy journey for the Maroon Knights.

The Rebels ended their season on a three-game winning streak and are making their first playoff appearance since 2016.

“We watched them on film and they are big, aggressive, they run a power offense, they spread the field out and run it off tackle and they come off the ball well,” Wheeling Central coach Mike Young said of this week’s opponent. “We have our work cut out for us.

“It’s a long drive down to Fort Gay, WV. but it’s next team up. We have to play good ball because they have a good record and played a good schedule.”

Leading the Knights into battle is senior quarterback Jacob Rine, who took over for the injured Curtis McGhee earlier in the season.

Rine has held his own and is coming off a victory over Magnolia where he threw for 130 yards and two touchdown passes and a performance that saw him rack up 153 yards and three touchdowns against St. Clairsville the week before.

He is joined in the backfield by speedster tailback Jordan Waterhouse.

Waterhouse has garnered 813 yards on 98 carries this season and has rushed for nine touchdowns.

Jalen Creighton is Rine’s top target and will be looking to get into space this weekend.

Creighton has collected 479 yards and eight touchdowns on 31 receptions.

Another offensive weapon at the Knights’ disposal is all-state linebacker Adam Murray.

Since McGhee’s injury, Murray’s touches on offense have increased after dealing with an injured ankle earlier in the campaign.

He ran for two touchdowns in a win over Paul Public Charter and during last week’s triumph over Magnolia, Murray charted 34 yards and a score.

“We’re looking to continue to move forward,” Young said. “It’s a challenge losing Curt but our kids want to three-peat.

“Murray had a bad ankle earlier in the season and that’s why we weren’t using him. We didn’t want to wear him out on offense, too.”

Junior Tanner Copley can be explosive anywhere on the field as he has thrown and caught touchdown passes this season.

“Their running back is very good,” Young said. “They’ve had great success and they don’t throw the ball a whole lot but when they do they are effective.

“They run a mid-line offense pretty good. They’re quarterback and tailback are efficient and effective. Our kids have to read their keys and read their areas. They can’t get sucked in on play-action and let them throw a long pass on us.”