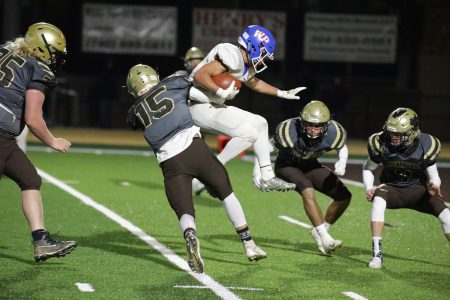 Photo by Alex Kozlowski Wheeling Park’s Kenya Robinson and the Patriots are counting down the hours until kickoff for this year’s playoff opener against Capital.

WHEELING — A team with a bevy of offensive skill position players but an offensive line that will need to be entirely rebuilt.

That was the situation facing Wheeling Park entering the 2019 high school football season. A capable team with plenty of questions.

Those questions, however, were answered emphatically by Coach Chris Daugherty’s Patriots who finished the regular season with an 8-2 record, with those two losses coming by just five total points, and a first-round home playoff game.

Friday night No. 6 Wheeling Park will host a familiar foe in the opening round of the West Virginia Class AAA playoffs when 5-5 record Capital pays a visit to the Friendly City and Wheeling Island Stadium.

The two teams have actually faced each other in the playoffs in four of the previous six seasons and are the only two big-school teams to win a state championship this decade besides powerful Martinsburg. The Patriots defeated the Cougars by a 23-15 margin in the 2015 state championship game.

“The bottom line is that Wheeling Park is five points away from being undefeated but also a hair away from being 5-5,” Daugherty said of his team. “Any good team can come up short in a few games and find themselves in that situation.

“At the same time in just a blink of an eye Capital is a team that could easily be 8-2. They are very capable and very talented and could easily make a run. They are typically a top six team and I would be lying if I said I wanted to or even thought that we were going to draw them in the first round.”

Coach Jon Carpenter’s Cougars had one of those tough losses last week, a 20-16 setback to George Washington that dropped them to the No. 11 seed. That same night Wheeling Park was busy capping their 8-2 regular season with a prized 48-28 victory at arch-rival John Marshall.

Sophomore quarterback Evan Lander is a weapon for Capital and the leader of the offense. Lander has completed 117 of 202 passes for 1,488 yards, 19 touchdowns and 11 interceptions.

The Cougars’ five losses have come to teams with a combined 42-9 record and include Kentucky power Johnson Central and W.Va. big school powers Cabell Midland (10-0) and Spring Valley (9-1), who’s only loss is to Cabell Midland.

“It is a typical Capital team that can both throw and run the football very efficiently,” Daugherty said. “They like to run the ball but there is a lot of talent on the field and the Martin kid out wide is a real problem. They will run screens and take their shots down field with him.”

While Wheeling Park has plenty of big-play ability and plenty of playmakers there is no question and it is no secret about what makes the Patriots’ offense run — senior quarterback, and Kennedy Award candidate, Alex Dunlevy.

Dunlevy has been nothing short of sensational all season, completing 149 of 216 passes for 2,481 yards and 27 touchdowns, with the ability to also beat you running the football.

Junior Carson Namack (37-746-5) leads a star-studded receiving corps that also includes Stevie Mitchell (34-565-11), who can also beat you as a running back, along with senior Xavier Morris and juniors Shaheed Jackson and Sincere Sinclair. Namack, Mitchell and Jackson all had touchdown receptions last week against the Monarchs.

Rapheal Bradley leads the running game with 581 yards and five touchdowns but is backed by the more-than-capable Kenya Robinson, who had 90 yards and two touchdowns a week ago.

Junior Andrew Glass is also a weapon in the kicking game, among the Ohio Valley leaders in extra-points, Glass kicked a pair of field goals at John Marshall.

“What our offense has done this year has an awful lot to do with Alex Dunlevy and his leadership,” Daugherty said. “And it isn’t just physical with Alex, it has a lot of do with the mental aspect as well.

“I wasn’t very happy with our defense last week, but as usual we made enough plays to get the job done. They forced our offense into a punt after our first series, but we scored on every possession after that.

“This team dealt with a lot after the St. Clairsville loss, but we fought through adversity and when you can do that it is only going to make you better. Losses can make you better and sharper. I like to point back to 2015 when we lost to Brooke, I honestly don’t know if that team could have won a state championship if we had beaten them.

“It’s tough to get a home playoff game in AAA but we would love to be able to host two or three of them. Home playoff games and practicing the week of Thanksgiving are always a couple of major goals for us.

“Capital is a tough opening game for us, and I am sure they feel the same way. I really can’t speak for them, but I am sure there are places they would rather be playing Friday night.”

Friday night’s winner will advance to take on the winner of No. 3 Spring Valley, the three-time state runner-up, and No. 14 Hurricane in next week’s state quarterfinals.