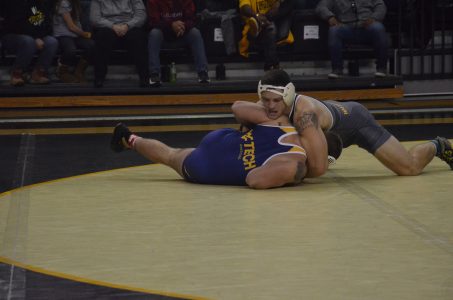 Photo by Kim North West Liberty’s Isaiah Myers has control of WVU Tech’s Jacob Thomas during the 184-pound bout Wednesday night inside the ASRC on the Hilltoppers campus. Myers, a former Wheeling Park state champion, earned an 18-3 technical fall as the Hilltoppers rolled, 48-3.

WEST LIBERTY — The Danny Irwin era at West Liberty couldn’t have had a better start Wednesday night. The nationally ranked Hilltoppers posted a convincing, 48-3, college wrestling rout of visiting WVU Tech before a nice-sized crowd inside the ASRC on the Ohio County hilltop.

The Hilltoppers, who checked in at No. 12 in the National Wrestling Coaches Association D-II preseason Top 25, won seven of the eight matches contested and recorded four pins. Three of those falls came after halftime, something the pleased Irwin, who was named the D-II Coach of the Year last season when he led then-Wheeling Jesuit University to a national runnerup finish.

“I think the way those last five guys went out there and competed we finished things off in a manner of what we expect out of our wrestling program,” Irwin said.

“It’s all about how you finish, but you have to have a starting point,” Irwin said. “No matter how good you think you are in practice, until you’re out there against another team that is going to fight back just as hard, you don’t know what you’ve got.”

Myers, a former Wheeling Park state champion, dominated his match against Jacob Thomas from the start. The Hilltopper senior led 4-1 after one period and 6-2 entering the third where he piled up a dozen points, the final four coming just ahead of the final buzzer to secure the 18-3 triumph.

“There’s a guy that wasn’t sure about some things going into the year, but he’s somebody that has put it (the time) in and trusted us as coaches,” Irwin said of Myers. “The fans probably saw that tonight because the things we were shouting to him and coaching him up on, he was very in tune to those things.

“He’s a good model for some of these other guys. These guys (my assistants) are in the corner for a reason. They (our wrestlers) need to look to us a little bit more.”

Myers was happy with his first outing.

“I pushed the pace the entire time, which is what I wanted to do,” he said. “I need to get in better shape yet. There’s always room to grow and that’s what I look forward to against good competition on Saturday.”

The No. 3-ranked Bunch looked really good in return to competition.

“I think with the level of competition in our room and the way he pushes day-in and day-out, I expected that,” Irwin said of Bunch’s performance after he red-shirted last year. “After taking a year off, per se, it was nice to see him go out there and wrestle like he did.”

Bunch said he couldn’t wait to get back on the mat.

“No rust. I was so excited after taking the year off. I’m wrestling up a weight class this season, I’m excited.”

Irwin knows things will get tougher as the youthful Golden Bears just couldn’t stack up.

∫ The WLU Acrobatics and Tumbling squad performed at halftime.