Ohio Valley’s Greatest Games: 1996 — Linsly vs. Bridgeport, A Meeting of the Unbeatens 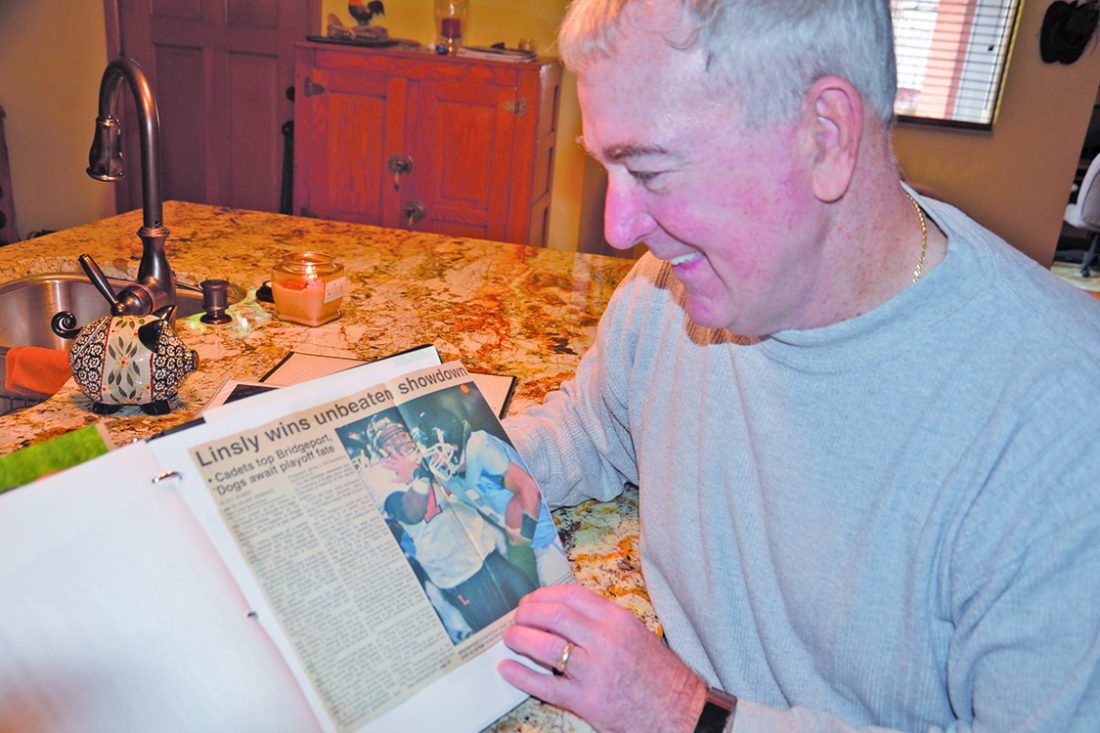 Photo by Kim North Former Linsly coach Terry Depew looks at a scrapbook of his team’s 10-0 season in 1996. The perfect year was capped with a 20-14 victory over Bridgeport in a classic on a frigid Saturday night at then-Perkins Field in Brookside. Pictured is a story of that game.

BROOKSIDE — It was quite likely the most-hyped game in Ohio Valley high school football history. And it sure lived up to the billing as thousands of fans can attest.

The “Meeting of the Unbeatens” at then-Perkins Field in Brookside saw a pair of very talented 9-0 ‘small school’ squads — Bridgeport and Linsly — lock horns on a frigid Saturday night in early November of 1996. Fans packed the bleachers and stood 5-6 deep around the field to watch the only game in the valley that night.

Terry Depew’s visiting Cadets sprinted to a quick 14-0 lead on a pair of touchdowns from future Penn State and Detroit Lion performer Eddie Drummond only to see Rick Goodrich’s Bulldogs battle back to make it 14-7 at the half on a TD run by Bryan Widmor. Bryan Fialkowski booted both Linsly PATs, while Marco Pozzoni kicked Bridgeport’s.

Drummond completed his TD trifecta with a 17-yard scamper, but the PAT was blocked as Linsly led 20-7. Widmor caught a screen pass from quarterback Chad Roskovich and went 27 yards to make it 20-14 with 2:51 left in the third quarter after Pozzoni’s placement.

Bridgeport threatened twice in the fourth quarter, only to be turned away both times by a staunch Cadets defensive unit.

“It (the game) really lived up to its hype. We had some great games leading up to it. In week 7 we played 6-0 Wellsville and had a great game. In week 8 we struggled but played well enough to beat a Kiski team on our field in the mud,” Depew recalled. “I remember a lot about game nine because we played (Columbus) Bishop Ready on a Saturday afternoon. They were undefeated at 8-0 and all the Bridgeport kids were there cheering for us. They wanted us to be 9-0 because they were already 9-0 after winning the night before.

“I remember that vividly. Here are the Bridgeport kids that we are going to play next week wanting us badly to win,” he continued. “We scored in the last seconds to do that (go 9-0). All those things contributed to the buildup. If we’re 8-1 it’s not quite as exciting. Hopefully, the game would have been the same, but the buildup wouldn’t have been the same.”

“I think both teams lived up to the expectations. I know we played to the best of our ability and I’m sure they did,” he said. “It was one of those things where we came out on the short end of the stick, but it was a privilege to play in a game like that.”

Both coaches said the atmosphere was like a small college.

“We drove in at like 5 for a 7:30 game and my bus-level seat was about the same as the stands,” Depew reflected back. “There wasn’t an empty seat anywhere. I couldn’t believe it. It was zero or below. It was cold, cold … bitter cold. I do remember that. … Fans were standing 5-6 deep around the fence. It was an unbelievable atmosphere.

“The buildup to the game couldn’t have been any better, and for the kids to be able to play in a game of that magnitude, it was amazing.”

Goodrich added, “What stands out the most to me was the anticipation … the buildup and the electricity that night. I remember going down to the lockerroom around noon and there were people waiting in line for the gates to open. We took the field for our walk-thru at 5:30 and both stands were packed, people were in the dugouts and they were stacked up 5-6 deep around the field.

“In all the years I’ve been around football, I’ve never been involved with something that had that much electricity and anticipation,” Depew said.

While Bridgeport had already locked up an Ohio playoff berth, Linsly had no state playoffs to compete in, thus making this contest its championship game. The OVAC Class 1A title was also at stake.

“Every year our last game is the end of our season, regardless, but not all of them have the excitement that one did. We had played in some big games before, but this one was in your backyard. Families knew each other. In fact, Dan (Stephens) was from over there and knew a lot of people from Bridgeport. Several of our other kids did, too.”

“They had one heck of a football team,” Stephens, who now operates his own insurance agency in Martins Ferry, said of Bridgeport. “To play a team like that in week 10, that was our playoffs.

“I don’t think we realized what type of crowd it was going to be until we got to the game. When we played it was usually our parents, grandparents and other family members, plus some students. We had never seen anything like that. We were used to playing in front of big crowds on the road, but that crowd was the biggest I had ever played in front of.”

When asked about Drummond, Depew couldn’t stop talking about his former standout.

“He was probably the most talented player football-wise. He was not, necessarily, the best athlete we ever had, Willie Clay might have been or some others, but as a pure football talent he was probably the best,” he said. “He had speed, toughness and smarts. He was every bit as a value on defense as he was on offense. The plays he made on defense throughout the year… . What a safety valve to have back there because nobody was going to score from any longer than 10-15 yards or he was going to run them down.”

Despite the loss, Bridgeport, as mentioned earlier, had already clinched a playoff spot. They defeated Milford Center Fairbanks at White Field in Newark before falling to Dola Northern Hardin in the second round at Gahanna Lincoln High School.