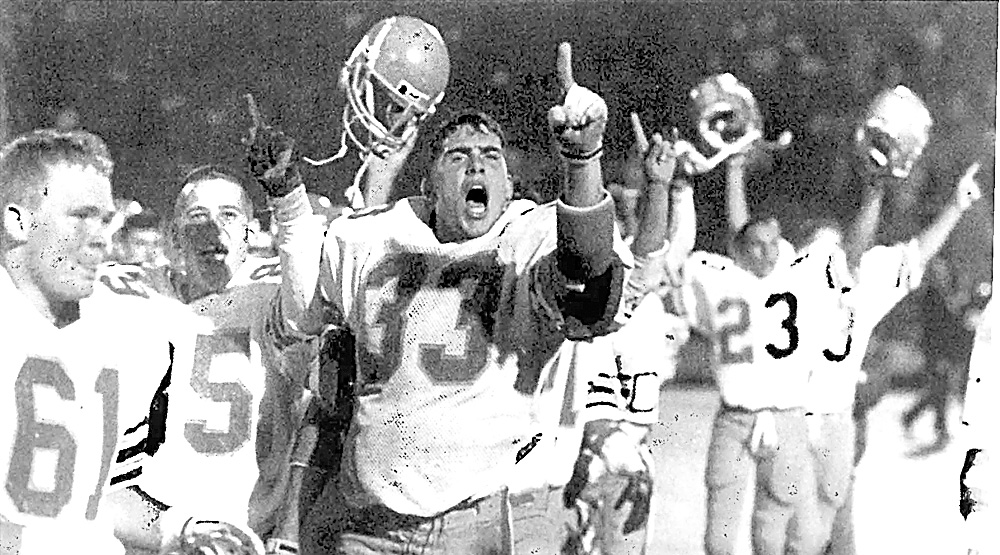 STEUBENVILLE — In the days leading up to the 1993 Ohio Division V championship game with Liberty Center, Steubenville Catholic coach Greg Bahen encouraged his seniors to have the last chapter of their story written the way they wanted it.

On Dec. 3, 1993, the Crusaders captured its first and only state title on the field with a 17-14 overtime victory. The title game was played inside Massillon’s historic Paul Brown Tiger Stadium.

The turnover bug bit the Crusaders hard in the first half. They lost two fumbles and had a pass intercepted. The defense was able to deliver stops after the first two turnovers but the Tigers were able to capitalize following the interception.

A 6-yard run by Keith Kern put Liberty Center up 7-0 with 8:35 left before the half. Steubenville Catholic’s offense got going following the score and put together a touchdown drive of its own.

With 5:02 left, Mike Kuczykowski hauled in a 14-yard pass from Mike Orlando. Benji Clause’s kick made it 7-7.

The score remained tied well into the final quarter. Liberty Center mounted a drive and moved deep into Crusader territory. That threat was snuffed out, however, when Orlando intercepted a pass in the end zone.

On the second play of Central’s ensuing possession, Orlando put the Crusaders ahead with a spectacular 67-yard touchdown run. He ran a draw up the middle, broke to the right sideline and raced to the end zone.

When discussing Orlando’s run play in an article featured on the CCHS Football website (www.steubenvillecentralcrusaders.com) Frank Spence, a member of Bahen’s staff, said “we called a quarterback draw. He followed the lead block and he just made a great play.”

Liberty Center responded by driving to the Crusader 10. The Crusaders’ defense, however, rose to the challenge and recorded a stop. Faced with fourth down and less than a yard to go at its own 19, Steubenville Catholic rolled the dice and went with a fake punt. The gamble failed and Liberty Center was back in business with 46 seconds remaining.

On their fifth play from scrimmage, the Tigers scored via a 7-yard pass. The extra point tied things at 14 with 13 seconds left in regulation.

Liberty Center won the coin toss and elected to start overtime on defense. Steubenville Catholic ran an option off a reverse by Clause who took a good shot and was injured on the play. That didn’t spell good news for the Crusaders, who were facing a fourth and goal from the 7 and opted to attempt a 24-yard field goal without their normal kicker.

Enter Kuczykowski, who was Crusaders’ kicker the previous two seasons. He hadn’t kicked all season. The snap wasn’t a good one, but Kuczykowski drilled the kick and put his team ahead 17-14.

On Liberty Center’s first play from the 20, quarterback Rex Miller was preparing to hand off when he was hit by the Crusaders’ Carmine Montana. The football came loose and was recovered by Crusader Larry Chambers to seal the state championship.

“For a split second, nobody moved,” Spence said about Central’s immediate reaction to the fumble recovery.

Moments later, players swarmed the field and the celebration began.

A crowd of 8,663 watched the game, which was just the fifth state championship contest to reach overtime.

Central was crowned Ohio poll champions in 1971 (arguably one of the best football teams in the history of the Ohio Valley) and 1946.

The 1993 seniors left Central as the winningest group of seniors in school history. They were part of the 10-3 club in 1991 which reached the state semifinals before falling to Warren JFK and the 7-3 squad in 1992. The 12-2 mark gave them an overall record of 29-8. They also earned three Ohio Valley Athletic Conference crowns along with two regional championships.

And just for good measure, many of those seniors were members of Central’s 1994 baseball team, which also won a state championship.