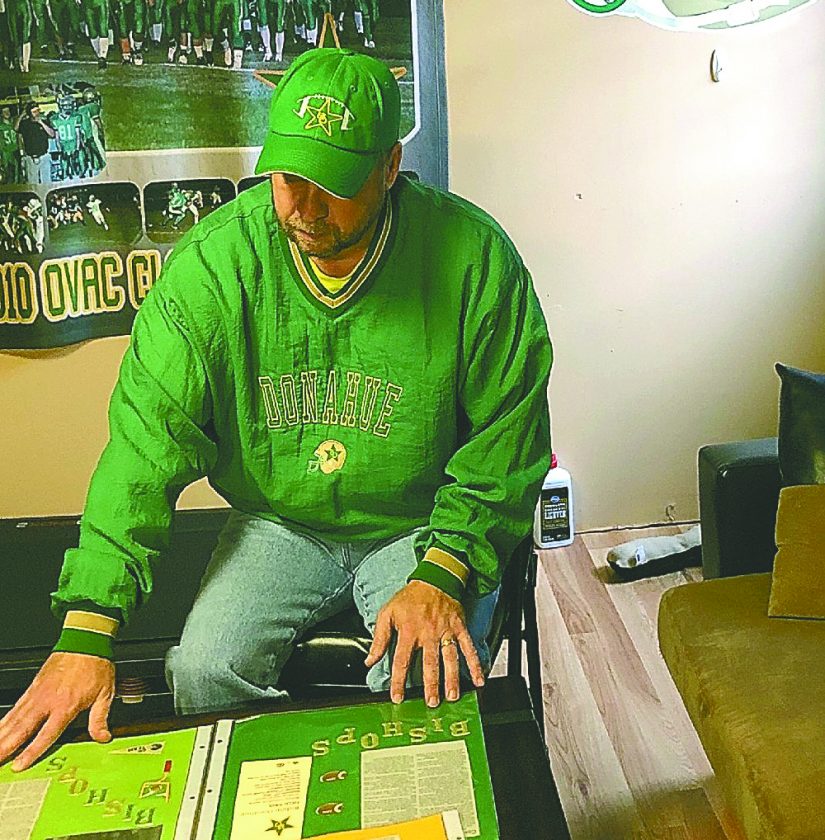 MOUNDSVILLE — When Wheeling Central won the 2010 West Virginia Class A state football championship with a 28-14 victory against Wahama on a chilly early December evening at Wheeling Island Stadium, it marked the Maroon Knights’ eighth state crown.

Perhaps, though, the championship was earned two weeks earlier.

For many, Wheeling Central’s showdown with Bishop Donahue in the state quarterfinals, won by the Maroon Knights 24-20, was the defacto state championship game.

The contest — Friday, Nov. 19 at Monarch Stadium — was the first meeting between the two members of the Wheeling-Charleston Diocese, and delivered on all the hype leading up to it.

“The thing I remember was that Shadyside was playing Bridgeport that night (Ohio Division VI, Region 23 final in St. Clairsville) and the (Fantasy in Lights) parade was going on and it was standing-room-only,” then Bishop Donahue coach John Durdines said of the game, which featured three lead changes in the final 3:40, along with some memorable late-game calls.

“There were probably 5,000-6,000 people there for two (West Virginia) Class A teams, which was an incredible thing for this area.”

The Maroon Knights and Bishops seemed to be on a collision course all fall. Although they weren’t scheduled to play in the regular season, area football fans were anticipating the two squaring off in the postseason, if both were to make it.

That was pretty much a no-brainer, as far as Bishop Donahue was concerned.

Following a period of mediocrity, including an era early in the 2000s that almost saw the program go extinct and included a 30-plus game losing skid, Durdines built the program back up and entered the 2010 campaign with plenty of optimism.

Led by quarterback Jordan Angalich, receiver and future all-state captain Ryan Jones, and defensive lineman Kaleb Kucera, the Bishops steamrolled through the regular season. Bishop Donahue blanked Cameron on the road, 57-0, in Week 1 — one of five shutouts — and only allowed 43 points during the regular season.

The highlight of regular-season play was a 21-6 triumph against Madonna in Week 9. The game, played on a Saturday night at Monarch Stadium, featured another one of Coach Bob Kramer’s talented units and was a postseason tuneup, of sorts, for both teams.

“That was the first time we’d beaten Madonna in about 12 or 13 years,” Durdines, now an assistant at Linsly, recalled. “That was the first game the whole year that my starters played in the second half, which I knew we were going to have to do going into the playoffs. That’s the one thing I was concerned about, whether or not we’d be able to put in a 48-minute game.”

One night before that showdown, Wheeling Central and Shadyside battled at Fleming Field. The Tigers, who’d go on to play in their second state championship game in five seasons, edged the Maroon Knights, 26-21. That was just one of many tough contests Wheeling Central played that fall. Others came against Bridgeport (loss), Martins Ferry (win) and Linsly (win) — all playoff teams, with the exception of the Cadets, who finished 8-2.

The Maroon Knights finished regular-season play 6-4, but its strength of schedule enabled them to finish sixth in the 16-team Class A playoff field.

“I’ve been very fortunate to have a lot of playmakers over the years,” Wheeling Central coach Mike Young said, “and, that year, we had some good ones in Lee (Peluchette) and Mac (Peluchette) and Marcus Clifford and Austin Frohnapfel.”

For the Bishops, who were new to the big stage, the buildup to the game was tremendous.

“There was a strange silence amongst the team leading up to the game,” Angalich recalled. “But, we were all on the same page.

“We knew that we put in the work to take them on, and it was only a matter of implementing the gameplan.

“The silence broke as we ran through the banner, welcomed by cheers and boos from a packed stadium.”

“I think I was more nervous than they were,” Durdines said with a chuckle. “They were just excited to go out and prove they belonged on that stage. I just wanted to make sure I had them in the right mindset.”

Both coaches believe the game was one that should’ve taken place at Wheeling Island Stadium.

“It’s a shame that it wasn’t played in December” Durdines said. “I think I would’ve been lying to my kids if I didn’t tell them (Wheeling Central) was the best team we’d face in the playoffs.”

Young agreed the contest pitted the two best teams in Class A.

“I can’t say enough about both teams and how hard they played,” he said. “It was a heckuva high school football game and one of the most-thrilling games I’ve ever coached.”

Bishop Donahue jumped out to a 13-3 lead early in the third quarter, only to watch the Maroon Knights cut the deficit to 13-10 on a 2-yard Clifford run early in the fourth.

Clifford put Wheeling Central on top with a 1-yard run. That set the stage for a raucous last 3:40.

Wheeling Central’s kickoff went out of bounds, giving the Bishops the ball at the 35.

On Donahue’s first play, Angalich was incomplete. But Central was called for roughing, moving the ball to the 50.

On the next play, Angalich and Jones hooked up for a TD strike over the middle, giving the Bishops a 20-17 lead with 3:39 left.

“The play that really sticks out in my mind is that play,” Angalich said. “The energy after that play was palpable.”

On 3rd-and-10 of Wheeling Central’s ensuing march, Lee Peluchette hit Clifford with a screen that netted four yards. Then, on fourth down, he connected with Frohnapfel for seven and the first.

“I really believe if we played them 10 times, they would win five and we would win five,” said Lee Peluchette, now an assistant for Young with the Maroon Knights. “Those guys at Bishop Donahue were the same kids that we learned how to win football games with when we were just 9-, 10-years-old playing in the parochial league together at St. Vincent’s.”

On the next play, Ian Yahnke made a leaping grab down the right sideline for 37 yards. Later on that same drive, the Maroon Knights were faced with 4th-and-13 at the Bishops’ 20. Young decided to send Brad Cottrell in to attempt a 36-yard field goal.

The kick failed. However, Durdines had called time just before the play, giving Young a reprieve.

Instead of trying another kick, Young went for the whole ball of wax.

Peluchette dropped back and hit Frohnapfel over the middle for the game-winner.

“There were 10 games before that game and, in four of them (Bridgeport, Shadyside, Martins Ferry and Linsly) we had to score on the last drive to try and win,” Peluchette recalled. “Incredible offensive line play and finally, a lot of luck and answered prayers.”

Young remembered one peers’ view of the final moments.

“(Magnolia head) coach (Mark) Batton had gone to the Shadyside game and he stopped on his way back,” Young said. “He couldn’t get into the stadium, so he pulled into the Subway parking lot next door.

“He called me a riverboat gambler.”

Young came up a winner.

“I had a gut feeling we could get it,” he said.

Durdines said no one had any reason to hang their head on his sideline.

“It was just a great game with a bunch of good kids on both sides that played their best,” he said. “There wasn’t anyone that had a bad game. One team had to win, and Wheeling Central did.”

Young believes, though, high school football and the valley’s fans were victors.

“We were fortunate to win.”