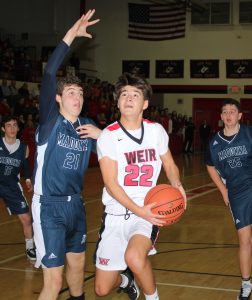 WEIRTON — Weir and Madonna battled on even terms throughout Friday night’s city championship game before a packed house inside the Carl Hamill Fieldhouse, with the Red Riders making two key plays in the final two minutes of the game that gave them a thrilling 42-40 win and their second straight city title.

Madonna (6-3) went into the final quarter with a slim two-point lead at 29-27 and increased that to 31-27 on a Lucky Pulice basket. But, the Red Riders were able to make enough plays going down the stretch to receive the traveling trophy during midcourt ceremonies following the game.

The game was nearly a carbon copy of the first matchup between the two teams on Dec. 18 inside the Dube Dome — except that game didn’t have as many sloppy plays and a higher score, 62-60. There were a total of 11 turnovers by the two teams in the fourth quarter alone and, overall, Madonna had 20 miscues and Weir totaled 15.

“Things got a little tough when we got behind in the fourth quarter, but I think with the schedule we play it seems that every game has been that way,” Red Riders coach Mike Granato said.

“You always get a lot of scenarios, and we’ve actually spent a lot of time in the last couple of days working on that late-game situation. I just wasn’t happy with the way we had been doing the delay, but we had a couple of turnovers there late, so we have to continue to work on being smarter with the ball.”

Granato’s team came out hot, scoring the first 10 points without a return. However, after a timeout was called by Madonna coach George Vargo, his Blue Dons settled down and went on a nine-point run to trail, 10-9, after one period. From then on, it was back-and-forth play. The teams broke at halftime with the Red Riders holding a 23-21 lead.

Both teams found points hard to come by after the break, and Madonna went up, 29-27, going into the fourth quarter.

Weir (5-3) retrieved the lead with 4:30 left in the game on a Elijah Gillette field goal that made the score 32-31. The Red Riders were able to maintain the lead the rest of the way.

The first key late play for Weir was a Tanner Mikula baseline drive layup during which he was fouled. He went to the foul line with 2:15 left in the game and made the freebie that armed Weir with a 40-34 lead.

After Pulice banked in a 3 at the 2:01 mark, senior Sebastian Spencer made a crucial steal in the Madonna backcourt and fed Gillette a long pass that resulted in a breakaway layup that opened a 42-37 Red Riders lead. Madonna’s Evan Boniti drained a 3 with 1:09 left, cutting the lead down to 42-40 .

From there it was a game of strategy by both coaches, as Granato got a timeout with 51 seconds remaining. Weir came out of that pause in play and worked the ball but the Madonna defense forced a crucial turnover, giving the Blue Dons the ball with 35 seconds remaining.

Vargo took a timeout, and the Blue Dons milked the clock for a final shot, but it didn’t go down. Gillette was fouled on the rebound and missed the free throw with five seconds left, but Mikula was able to run down the rebound to seal a win for Weir.

Gillette and Brodie McUmar each scored 10 points to lead the Red Riders. Pulice scored 12 to lead the Madonna scoring. Brennan Secrist finished with a double-double, scoring 10 points and leading all rebounders with 14.

“We got that timeout in the first quarter and got the kids settled down and they went out and played a good game. Basketball is a game of runs. They had runs and we had runs, but we had our chances at the end. We were in our power defense and got a Weir turnover but couldn’t make that last shot.”

Granato said he felt it was the senior leadership on his team that may have made the difference in the game.

“We feel we have a pretty good bunch of guys that can go to the basket with one-on-one situations and, when we see an overplay on the baseline, we want to take advantage of it,” he said. “Tanner didn’t necessarily have a good offensive game. However, when it came time of our guys to make shots down the stretch, they did. That’s what seniors do and it came down to a group of kids that really wanted to win the game.

“I thought this was a great atmosphere for a high school basketball game in the city of Weirton. The place was packed, it was really rocking with both fans going at it. Everything was clean. The game was played hard, but played clean. The second thing is I really appreciate Coach Vargo, his staff and the Madonna team staying out on the floor and applauding us when we received the trophy. That is a class move and as we go to the second half of the season I want to wish Madonna luck going down the stretch.”