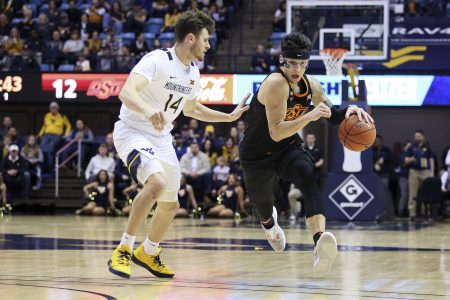 West Virginia (19-7, 7-6 Big 12) cut down on its turnovers in breaking a three-game losing streak, which including losses last week to top-ranked Baylor and No. 3 Kansas.

The Mountaineers fell behind by 10 early but got back on track with tough defense. Oklahoma State shot 17% (5 of 30) from the floor after halftime and was held to 14 points, the fewest allowed by West Virginia this season.

McNeil made three free throws after getting fouled on a 3-pointer. That capped a 20-4 run to start the second half and gave the Mountaineers a 48-37 lead with 8:42 remaining.

West Virginia’s comeback actually started with the final shot of the first half. Jermaine Haley hit a 3-pointer from the corner on an inbounds pass as time expired. That trimmed the Mountaineers’ deficit to 33-28, and they maintained the momentum the rest of the way.

Oklahoma State: The Cowboys shot 60% from the floor in the first half but went cold after that, going more than five minutes without a field goal to start the second half.

West Virginia: The Mountaineers averaged 17 turnovers during their losing streak but committed only 10 on Tuesday. Still, there’s plenty of work to do to earn a high seed in the NCAA Tournament. West Virginia shot just 2 of 16 from 3-point range.

The Mountaineers have dropped four straight on the road.