Deal worth over 1-million dollars 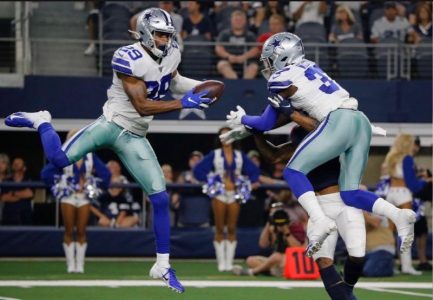 Photo Provided Dallas cornerback and Linsly graduate C.J. Goodwin signed a one-year deal worth over one million dollars on Friday to remain with the Cowboys.

WHEELING — Coming from a small town, Linsly graduate C.J. Goodwin aspired to play in the NFL and wear the Dallas Cowboys’ star on his helmet.

The East Wheeling native has been living that dream for the last two seasons, a dream he won’t be waking up from in the near future.

On Friday, the 30-year old Goodwin re-signed with his beloved Cowboys, a contract worth over one million dollars for one season, per ESPN’s Adam Schefter.

“I feel blessed,” Goodwin said. “To be coming from where I come from and to get a deal with my childhood team for more than the minimum, any deal in the NFL is a blessing but this is amazing.

“It’s a real feeling going out on Sunday’s with the whole theatrics coming out of the tunnel. It gives me chills right now just thinking about it.”

Goodwin’s work ethic and talent shine through on the gridiron every week. He’s specifically made a great impact on special teams in Dallas, racing down the field and collecting 10 tackles last season.

The 6-foot-3 cornerback believes special teams is key for players hoping to make it in the NFL.

“I take it seriously,” Goodwin said. “A lot of players don’t take it seriously. They think offense or defense is the way to make it but for me to stay in the league, I take advantage of it as much as I can.”

Helping get the deal done for Goodwin is his agent of five years, Drew Rosenhaus, who represents some of the most prominent players in the NFL.

“He’s great, if not the top agent in the league,” Goodwin said. “It’s a blessing for a guy like that to work for a small-town guy like me. My play spoke for itself but he worked hard for me.”

The Dallas organization has seen some turnover this offseason with the firing of nine-year head coach Jason Garrett and the hiring of former Super Bowl champion Mike McCarthy.

Both Garrett and McCarthy think highly of Goodwin, which gives him even more confidence to perform on the field.

“I’m valued by my coaches” Goodwin said. “We don’t have (Garrett) anymore but (McCarthy) called me and said that he valued me and I’m glad they value me.

“Special teams has been my calling and I feel that I’m one of the better special teams players in the league.”

Goodwin has spent five years in the NFL, which has included an appearance in the Super Bowl with the Falcons, where he accounted for three tackles and a pass deflection.

Now, others from the Ohio Valley have the chance to follow in his footsteps in search for NFL careers of their own, such as Union Local grad Colton McKivitz and Wheeling Park grad Elijah Bell.

“I talk to Elijah all the time,” Goodwin said. “He has a real shot at the NFL. There are a lot of politics and they have to understand it’s a business first. They already have the talent, now they just have to focus on the main goal and it will work out.

“I was told ‘no’ by four or five teams this offseason but don’t get discouraged. It will work out.”

Goodwin is opening the door for not only McKivitz and Bell, but for young kids all over the Ohio Valley, who dream of running out of that tunnel under the bright lights of the NFL.

“Anybody can do it,” he said. “I’m born and raised in East Wheeling. Not so many people thought something could happen for someone from East Wheeling. Only the people in my community believed that we could do it.

“I might be in the latter part of my career but it feels like the start of my life. So, just hone in on your talent and anything can happen. I look forward to seeing the next person up.”