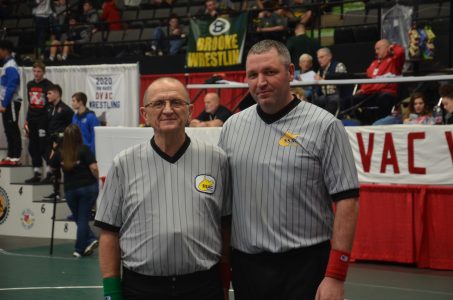 Photo by Kim North Jack Regis, left, is pictured with his son Tom prior to working his final OVAC Tournament match this past January. The elder Regis was to be inducted into the Ohio High School Wrestling Officials Hall of Fame tonight prior to the championship finals of the 83rd annual state tournament. However, the festivities, along with the entire tournament, were canceled due to the coronavirus pandemic.

MARTINS FERRY — Being in the right place at the right time turned into a hall of fame career for a city resident.

Jack Regis just happened to stop by the Martins Ferry Open wrestling tournament back in 1992 to see how things were going. Twenty-eight years later, he’s joined an elite group of individuals.

“I stopped to watch Larry Deaton and a few other officials on my way to the lake to see my brother. Larry, Steve Kish, Ray Marling and a couple of other guys were working shorthanded because a couple of officials didn’t show up,” Regis recalled.

“Larry told me to get on a mat over in the girls gym and help get some of these matches refereed. That’s when the fire started to become an official. I was probably up there eight hours.

“From there I went on to get my officials license and with the help of many experienced officials, I’ve had a very good career officiating.”

He cited former referees such as the aforementioned Deaton, Kish and Marling, along with Jim Crosier and Sean Crosier for helping him out during his elongated career.

“There are so many coaches that helped me along, too,” he said. “Early in my career there were some guys that gave me matches to get my career started.”

Regis wrestled at Martins Ferry, but his career was nothing compared to what he ended up doing on the mat

“I tried but it just wasn’t for me,” he allowed. “I loved the sport but it wasn’t my strong suit.”

Regis was scheduled to be inducted into the Ohio High School Wrestling Officials Hall of Fame tonight prior to the championship finals of the 83rd annual state tournament, however, the festivities, along with the entire tournament, were canceled due to the coronavirus pandemic.

“You work all of your career for one of these honors. I was looking forward to being in front of the whole audience and that while receiving my award,” Regis said. “It’s disappointing. It would’ve been nice because I had around 18-20 family members and friends coming and that doesn’t count some former wrestlers that said they were coming on Sunday just to see me get inducted.

“It’s nice to be honored, but that’s not why I got into officiating. My refereeing career was for the love of the sport and the kids. I enjoyed every minute of what I did. I had fun.”

Although he has been enshrined by his peers, he is only going into semi-retirement.

“I worked the Division III heavyweight state championship match. It went into overtime and wound up being the final match of the tournament as the Division I and Division II matches had already finished,” he said of Oak Harbor’s Brandon Garber’s 3-2 decision over Hamler Patrick Henry’s Brandon Bennett. “We were out there in front of the entire crowd. It was a fun experience.”

That’s not the only year he’s worked in Columbus, however.

Regis had the opportunity to work his final OVAC Tournament this past January with his son, Tom a first-year referee who is in for the long haul.

He has also been the secretary/treasurer of the officials association for 23 years.

“Through a lot of hard work and the help of many, the association has grown financially and with new members,” he said. “I became an instructor when it first started and have been doing it since that time. I have added more than 25 officials to wrestling. I am also the only assigner in the eastern district.

“My hope is to continue adding new officials and grow our association and the sport of wrestling.”

Regis knows there are people out there that need mentioned.

“A special thanks to Larry, Steve, Dr. Bill Welker and Dan Kutcher for getting the letters of recommendation out for me and getting me into the hall of fame, Regis said. “The biggest thank you, however, goes to my wife, Billie, who put up with a lot of weekends that I didn’t get to spend much time with her, the kids and the grandkids. She’s been a champ through it all and also one of my biggest critics. She’d let me know if I did good and she’d let me know if I did bad.”

The couple has been married 35 years.