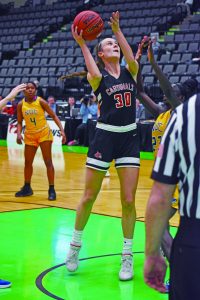 Photo by Kyle Lutz After averaging 21 points and 16 points per game in her first season with Wheeling, Lilly Ritz secured a spot on the Division II Conference Commissioners Association Second Team-All American squad.

WHEELING — Lilly Ritz honestly didn’t know what to expect in her return to the basketball court this winter.

After all, the Wheeling University sophomore didn’t play during the 2018-19 season after transferring from California, Pa. and she played minimal minutes as a true freshman at Cal, meaning her last significant basketball came as a senior at Cambridge High School.

Clearly it didn’t take Ritz long to shake off any rust that might have existed.

Ritz led the Cardinals in nearly every statistical category, including her 21 points and 16 rebounds a night. The latter, actually, was the best in the country in NCAA Division II.

Add in the fact that she tied a national record with a 36-rebound performance in a game against West Virginia State and it equates to a spot on the Division II Conference Commissioners Association Second-Team All-American squad, which was announced Monday afternoon.

“I feel very grateful for all of the accomplishments this year, but I couldn’t have done them without my team, coaches, friends and family,” Ritz said. “I am so lucky to have such an amazing group of girls (with me) on the court. I am very grateful for what this program has doen for me.”

And with Ritz leading the way, there’s no doubt, the Cardinals are grateful to her, too. Ritz’s honor is the first time since 1985 that a Wheeling player has been named to any of the All-American squads.

During the season in which she had to sit out, Ritz worked on her game and it was evident. She played with reckless abandon, dominating the paint most every night out for Coach Michael Llanas up-and-coming squad.

All told, she posted 25 double-doubles, which ranked third in the country; shot 59 percent from the field, which was 10th nationally and established single-season school records for points (630), rebounds (480), blocked shots (66) and made field goals (264).

“It took a lot of hard work,” Ritz said. “Not getting to play last year was rough for me, which followed up a season at Cal in which I didn’t get play very much.

“I’ve come a long way since then and right now, I’m just excited for the future.”

Ritz learned of the honor via social media and actually had no idea it was coming.

“Someone tagged me in a Tweet and it popped up on my phone,” Ritz said. “I told my boyfriend and then immediately called my parents to tell them. It was just a surreal feeling.”

While accolades and honors are nice, Ritz — a former multi-sport All-Ohioan in high school — looks at the big picture. She explained the most special moment for her this season was just simply developing such good chemistry with her teammates.

“(My teammates) are all my best friends,” Ritz said. “I am so grateful for the opportunity I had to get close with them all on and off the court.”

The Cardinals finished 11-19, but won a game in the MEC Tournament before falling to eventual champion Notre Dame College in the quarterfinals. Wheeling had only three seniors on its roster, so Ritz is excited about what could lie ahead.

“Next year’s goal is to have a better record and to win the conference tournament,” Ritz said. “It’s a lot of pressure to try to do bigger and better things, individually, and as a team, but I’m ready for the challenge.”