Championship Game Said to Be One of West Virginia’s Best 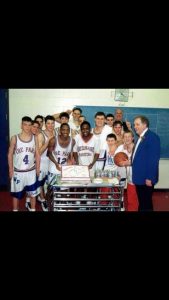 WHEELING — When it comes to high school basketball in West Virginia, the 1995 state championship matchup between Wheeling Park and Woodrow Wilson will most likely come up in conversation when debating the state’s best games.

The game had it all: last-second shots, players stepping up in big moments, a televised audience and a crowd of more than 8,000. And to put it more into perspective, the original 32 minutes weren’t enough. As two of the best teams in the state battled it out, it took three overtimes to determine a winner.

The Patriots, who were ranked No. 1 in the state, overcame a six-point deficit in regulation and held onto beat Woodrow Wilson, 99-96, as this year marks the 25th anniversary of that Wheeling Park state championship team.

It was also the last time the Patriots held up the hardware in boys basketball.

“It was a great game between two great teams who had great seasons the whole year,” Shane Mallett, who was a senior on Wheeling Park at the time, said. “We were lucky to beat Fairmont three times, which is something very tough to do. We played Beckley (Woodrow Wilson) and it was a seesaw battle back-and-forth. It was like two heavyweight champs taking blow after blow. At the end, luckily we came out on top.”

With one second remaining, Park’s Eric Zelaski hit his first free throw to put the score at 99-96. He missed the second and Woodrow Wilson got the rebound and heaved a 90-foot shot that went well over the hoop. That’s when a sea of Wheeling Park students rushed the court to celebrate.

In a game dripping with drama, the Patriots ended the matchup with four bench players on the floor as four starters fouled out. Michael Jebbia, a freshman at the time, was one of those role players.

“I came off the bench all season. I was a role player. I do remember when we got into the state finals, we were well into the third quarter and Coach (Sam) Andy had not subbed at all,” Jebbia, who is Wheeling Park’s all-time leading scorer, said. “He gone with the five starters for the entire game. But foul troubles started to mount throughout the game. Beckley didn’t have as much foul trouble.”

Mallett, who was the final starter to foul out with about 30 seconds left in the third overtime, along with all the other four he was sitting with, had all the faith in the world for their role players, including Jebbia, Brian and Brad Gardner and Zelaski. Freddie Howard was the lone Park starter left on the floor. Larry Waldrum, Justin Namolik, Rafael Cruz and Mallett all fouled out.

“At the end, it was frustrating, because you want to be out there,” Mallett said. “But we had the utmost confidence in our whole team. The guys who were in the game, who came off the bench so to speak, could have started on any other team in the Valley or state practically. They were great players, so you couldn’t look at them as bench players. They deserved to be out there just as much as anybody. That’s what made our team so great.”

Namolik, who was named first team all-state along with Mallett, echoed his classmate’s thoughts.

“When I think back to that game, one of the things I really enjoyed about being on that team was going to practice with a lot of those guys, and during the year some of those guys that didn’t play a whole lot, but they were so great at practice,” Namolik said. “They played hard, pushed the starters and the guys who played a lot of minutes. To watch them get into the game in the third overtime and win that game, that really stands out to me. It truly was a total team effort.”

Wheeling Park was staring adversity in the face, trailing 73-67 with just under a minute left in the fourth quarter. However, there was no sense of panic in the Patriots.

“There was no point during the game where we hung our heads and thought we couldn’t win this,” Mallett said. “We had a very potent offense. I think we averaged almost 100 points a game. We knew we could score very quickly. A six, seven point lead, even with a minute, that’s still a lot of time in basketball.”

Howard hit a 3-pointer with 49 seconds remaining to cut the lead to a one possession game. With 23 seconds left on the clock, Cruz, a freshman, was fouled while attempting a 3-pointer. He swished all three free throws to tie it.

Near the end of regulation, Mallett was guarding Gene Nabors on a one-on-one as Woodrow got through the Patriots’ press. Mallett pulled off a huge defensive play as he blocked the shot to force the first overtime.

Once again, the Patriots were down in the final seconds of the first overtime before Namolik tied it with a layup.

Mallett scored eight straight points for the Patriots in the second overtime, but Woodrow Wilson overcame a four-point deficit to forced a third extra period.

With the score tied at 96-96, Howard made two free throws to put Wheeling Park up for good.

“In culmination, there was size, there was great quickness. Our point guard Freddie Howard, he kind of gets lost in the shuffle. He was an outstanding point guard. He could move the ball up and down the floor. We had nice size. Shane and Justin were 6-6 or so. Rafael, he was about 6-1, but he was a tremendous jumper. Larry was our defensive stopper. He was usually on their best player. It was a nice combination of everything. It was a nice starting lineup and a nice bench. We had good players on the bench.”

The game is not only something the players will remember for the rest of their lives, but it’s a game that’s is likely still brought up today, 25 years since tipoff.

“I think it’s something to this day, 25 years later people will still mention it to me and I haven’t lived in Wheeling for 25 years,” Namolik said. “That game was on television and I live in the Eastern Panhandle now and I meet people through Shepherd basketball that people know West Virginia basketball. And people remember that game.

“I remember shortly after we won, it was like a week or two later, my girlfriend and I went to a mall in Pittsburgh. I remember someone stopped me and said they watched the game and was one of the greatest games they ever watched. I think the fact it was on television and a lot of people saw it just made it really memorable for so many people. It’s crazy people still remember it. It was definitely an emotional week and to finish it off with a state championship was really special and one of the highlights of my basketball career.”

Four Patriots finished with double-doubles. Shane Mallett had 34 points and 11 rebounds. His 34 points are the most points scored by a Wheeling Park player in the state tournament.

Cruz turned in a 24-point, 10-rebound performance while Namolik had 16 points and 13 rebounds, respectively. Howard had 17 points and 10 assists. Howard holds all the assists records (game, season, career) at Wheeling Park.

They lost the season opener to East Liverpool.

In the fourth game of the season, Wheeling Park and Woodrow Wilson faced off in Beckley, with Flying Eagles securing the victory.

Even in defeat, Coach Andy felt that his team could win the rest of their games and raise the hardware at the end of the season.

“We lost to East Liverpool in the season opener. We then lost to (Woodrow Wilson) in the fourth game of the year in their Holiday Classic in December,” Jebbia said. “I remember coach saying in the locker room, I think we can the rest of the games and win it all. And I’m thinking, ‘We’re 2-2. What’s he saying?’ And we won the next 22 games. It was just crazy.”

Wheeling Park’s semifinal game against Fairmont Senior was every bit as exciting as the championship tilt. The Patriots advanced on a buzzer-beater. After a missed Patriots’ attempt, Namolik and Waldrum both got a hand on the ball. Mallett came up with the board and put it in at the buzzer.

It was a controversial call at the time. With only two officials, the one at the baseline called the bucket good. However, the trail official called it no good.

They conferred with the official bookkeeper who called it good, giving Wheeling Park the victory.

“I remember that those calling game on the radio had access to a monitor and they saw it. They said it was good. And if you watch it now, it was good. Just thankful they made the right call,” Namolik said. “For me, just the heartbreak we had experienced in the regional, especially my junior year and just getting right back to work the next day. And all that work that was put in over the next 12 months to get to that spot was definitely something I’ll never forget.”