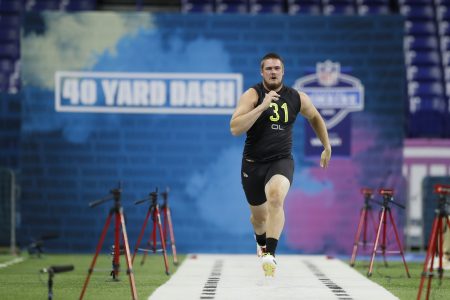 During the course of this weekend’s NFL Draft, plenty of stories will be shared about the journeys that players have taken to get to the point of becoming a professional football player.

When Colton McKivitz thinks about his path to what he hopes will be a lengthy career in the NFL as an offensive lineman, he can’t help but smile.

“It’s really just crazy when you take a minute to think about it,” McKivitz said.

Growing up in Centerville, the son of Matt and Wendy McKivitz, Colton wasn’t the annointed one or the athlete who most believed would become a professional.

After all, he really didn’t play his first real organized football game until he enrolled at Union Local before his sophomore year of high school in 2012.

“I wouldn’t trade any of it because every step of this journey was put before me for a reason,” McKivitz said. “The journey was laid out for me. I’ve just been going with it and will continue to do that.”

“It’s been a privilege watching Colton grow up,” Friends Church Pastor Jerry Wenger said. “Colton and I spent a lot of time together and we always talked about part of the thing that he needed to do was keep his focus because in sometimes in different arenas of life, things can tend to distract you.”

As an athlete at East Richland Christian, McKivitz played basketball and actually threw a no hitter with upwards of 20 strikeouts in a baseball game against Hundred as a freshman.

“To have gone from a small, private school to where I am is unbelievable,” McKivitz said. “I am still thankful for the support that everyone at East Richland Christian and through the church has given me.”

Not because of football, athletics, the school or education, but instead a family matter, McKivitz withdrew from East Richland and enrolled at Union Local. He played for Mark Cisar his first season there and then played for Bruce Stiles his final two seasons.

He was an immediate starter on both sides of the ball. Keep in mind, he was 6-foot-7, weighed some 260 pounds and was athletic.

Along with his football prowess, McKivitz was a standout basketball player, too. He helped lead the Jets to a district championship in 2015. He played one season for Vaughn Butler and then two seasons for Ben Porter, who is the current superintendent of schools.

“You could definitely see the potential in flashes,” Porter said. “He obviously had great size, moved well and had good feet. But, the biggest thing was his intelligence. He picked things up quickly.”

Though McKivitz garnered accolades and had success on the hardwood, his collegiate future centered around football.

During his junior season, colleges began to take notice of him. He and his mom visited a lot of schools and during the spring of his junior year he verbally committed to Miami of Ohio.

But, a few weeks later, then Mountaineer offensive line coach Ron Crook began reaching out. Eventually, McKivitz received an offer from West Virginia and the chance to play FBS level and in the Big 12 was simply too much for McKivitz to pass by.

From there, he red shirted in 2015, but made 47 starts in his career and was recognized as All-American by two different outlets in December.

“It’s just been a humbling experience,” McKivitz said. “It’s something that rarely happens for people.”

Porter believes that the success McKivitz has experience is something that current Union Local students — of all ages — can learn a lesson from.

“Colton and I have a very close relationship to this day, and you’re not going to find a better person,” Porter said. “In terms of the school, he’s a positive role model that younger kids can look up to.

“What he’s doing is unprecedented for our school. We’re as proud as we can be of Colton.”

When thinking of the impact he’s made and can continue to make at Union Local, his home church and really in the Ohio Valley caused him to feel some emotion.

“I don’t even know if there are words for it,” McKivitz said. “To be able to influence kids and have them look up to you like that means the world to me. To be able to represent my family, Union Local or the Ohio Valley like this is something I never thought I’d be doing, but I am excited to be doing it.”

Both Wenger and Porter complimented McKivitz for the type of human being is before either touched on the type of athlete he is.

McKivitz gives all of that credit to Matt and Wendy.

“I was raised by two great parents who taught me how to be respectful and how to treat people,” McKivitz said.

During McKivitz’s career at West Virginia, he turned a large faction of people, many of whom are Ohio State fans, into Mountaineer fans, too.

By the time late Saturday afternoon rolls around, area football fans will probably have another team to root for because their favorite player — Colton McKivitz — will be a member of the squad.

“A lot of guys have their hometowns behind them, but the support I’ve received from really all of Belmont County has been incredible,” McKivitz said. “I am just really blessed.”