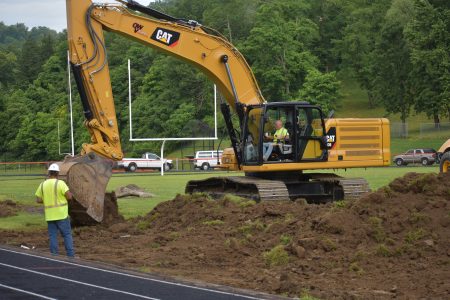 Photo by Seth Staskey Work began on the Fleming Field turf project Monday morning in Shadyside. A member of the crew from Ohio West Virginia Excavating operates a piece of heavy equipment as the natural grass surface is removed. The entire project is expected to last approximately 60 days.

SHADYSIDE — A dream and vision took another major step toward becoming a reality Monday morning.

Shortly after Shadyside was forced to play a 2018 home playoff game at St. Clairsville’s Red Devil Stadium due to poor field conditions at Fleming Field, the wheels were put in motion on a turf project.

After numerous meetings, fundraising and road trips to visit other venues just to finalize the exact details of how the field would look, the plans were approved and with a financial boost from the school district, the project got under way when a crew from Ohio-West Virginia Excavating arrived with several pieces of heavy equipment to begin removing the natural grass playing surface.

“The other day I was up here (at the field) and I was looking at the field and I thought, ‘this might be the best the grass has looked in 20 years,'” Shadyside head coach Mark Holenka said. “So, I kind of related it to getting a hair cut. The day before you have a hair cut scheduled, you look in the mirror and your hair looks pretty good and you think maybe I shouldn’t get one, but in the end, you know it’s needed.”

Holenka, who was putting his 2020 squad through a conditioning workout on Monday, watched as the outer rim of the field, which butts up against the track was removed and fully knew this was the best move for not only his program, but also the entire school district.

“This is what’s best for everyone,” Holenka said. “For us, the efficiency side of practice is what I am most excited about. We won’t lose practices due to weather, the markings are all exact. It just makes everything go so much smoother.”

The project is expected to last upwards of 60 days. That timetable includes 30 days for the excavating portion and then 30 days for the laying and stitching of the turf.

According to turf committee chairman Tony Francis, the project will be done before Shadyside’s home opener, which is scheduled for Sept. 4 against Buckeye Trail.

“Even if they have to work at night, this (field) will be done by the third week of August,” Francis said. “I am sure there has been a lot of doubt in some people’s minds that this would happen, but it’s an exciting day and I believe it’s going to be the nicest field up and down the river when it’s finished.”

Originally, the field renderings included a black end zone and borders, but after visiting Wellsville’s year-old facility, Holenka and the committee opted to go with orange end zones, black lettering and orange borders around the field.

After evaluating and talking with several turf companies, Shadyside elected to go with AstroTurf.

“They did Martins Ferry and Wellsville’s fields and, honestly, it came down to money,” Francis said. “It wasn’t that other companies couldn’t provide the product or do the job, it was the best deal.”

Speaking of funding, originally, it was hoped that all of the $800,000 price tag could be covered through private and corporate donors. However, just last month, the Shadyside Board of Education approved the contract with AstroTurf for $377,880 with the school picking up $228,880 of that.

“I am not sure this (project) would have happened this year without the school district’s help,” Francis admitted. “We’ve had some shortcomings on fundraising, but it won’t slow down the project. The support from the superintendent (John Haswell), the school board and community, this wouldn’t have happened.”

Along with the support of the school district, Francis also made sure to acknowledge Bud Davis and the Shadyside Booster Club, the Hendershot Family, which owns and operates Ohio-West Virginia Excavating, Pat Miller and Nancy Marzella.