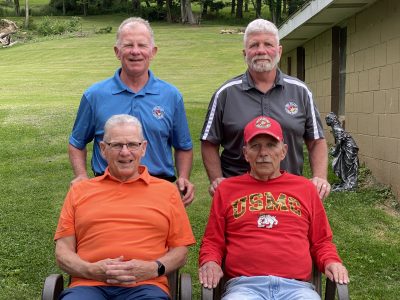 WHEELING — When wrestling enthusiasts talk about the mat sport at Wheeling Central, the first names that come to mind are the Doyle brothers: Pat, Mike, Matt, and Danny. In fact, they and family members have been involved in wrestling from the 1960s until this very day – in one capacity or another.

The Doyle wrestling tradition began with the eldest brother, Pat Doyle. As a Maroon Knight wrestler, Pat was the All-City Champion. He also placed 4th in the prestigious Ron Mauck OVAC Wrestling Tournament. He then wrestled one year at his college alma mater, Bethany College. But this is only the beginning.

Doyle began his coaching stint on the mats as an assistant wrestling coach under Tom Hogan, CCHS Athletic Hall of Famer. Coach Hogan taught him that desire and conditioning are key components to achieving in sports.

As head coach at Wheeling Middle School, Coach Doyle mentored future state champions, won a number of tournaments, including the PAC-8 Wrestling Championship. To be totally candid, it was a time in the PAC-8’s history when all conference wrestling teams were very, very competitive.

A mainstay of the Park Duals since its inception, Doyle is also actively involved with the Ron Mauck OVAC Wrestling Tournament.

Brother Danny was an outstanding Wheeling Park wrestler. In 2009, he was an OVAC Champion and was a silver medalist at the West Virginia State Wrestling Championships.

The second brother of the Doyle family tree, Mike Doyle, was an exceptional wrestler and coach who graduated from Wheeling Central in 1970. The “Maroon Knight” mat man was a Wheeling City Champion (1966 & 1967), Mountaineer League Champion (1968), Ron Mauck OVAC Wrestling Runner-up (1969) and Champion (1970) In fact, the 1970 Wheeling Central wrestling team won the gigantic OVAC Tournament that year under head coach John Hibbert. They were the first West Virginia wrestling team to win the OVACs.

A highly-decorated, retired USMC Chief Warrant Officer (less than 10% of enlisted men are selected), Doyle won the 149.5-pound Pacific Interservice Championship (1974-1975). During his 25-year military career (1971-1996), he had the pleasure of coaching his son, Chas Keys-Doyle, who was a 1993 North Carolina State Finalist in wrestling.

Doyle now volunteers his time as a Drug & Alcohol Counselor in West Virginia and Ohio. And his love for wrestling continues to this very day. Doyle is a fixture at the OVAC tournament, performing numerous duties in support of area wrestlers.

Next in the brother family linage is Matt “Chooch” Doyle, and he was a terror on the OVAC mats. An undefeated member of Central’s 1970 Ron Mauck OVAC championship team, Doyle was a two-time champion (1970 & 1971). In fact, he is one of only three CCHS wrestlers to accomplish such a feat.

During his scholastic mat career, Doyle won the Wheeling City, Mountaineer League, Brooke Quad, St. John’s Central and West Virginia Region One Championships. His best friend on the “Maroon Knight” wrestling team was the legendary athlete, David Bierkortte, who passed away due to a tragic accident between his junior and senior years. The outstanding wrestler award in the Ron Mauck OVAC Wrestling Tournament is named in his honor.

A graduate of West Liberty University, Doyle began his coaching career at the newly consolidated Wheeling Park High School, where he was one of the original wrestling mentors of Park’s successful mat sport tradition. He also gave of his time as a volunteer official at the inaugural Greater Wheeling Small-Fry Wrestling League Championships.

After retiring from a 40-year career as an industrial safety director, Doyle has enjoyed the opportunity to coach with his son, David Doyle. Also, a graduate of West Liberty University, David has coached wrestling at Triadelphia Middle School, Wheeling Middle School, and is currently the head coach of the resurrected Wheeling Central mat program.

Like his brothers, “Chooch” Doyle cannot stay away wrestling. He can also be seen performing numerous duties at the Ron Mauck OVAC Wrestling Tournament.

And finally, “Dr. Dan.” A 1973 graduate of Wheeling Central Catholic High School, Dan Doyle posted an outstanding career on the mats. He was a three-time place-winner in the Ron Mauck OVAC Wrestling Tournament, winning an OVAC individual title in 1972. He capped-off his scholastic wrestling career by being crowned the 1973 West Virginia State Champion at 112 pounds.

After graduating from Wheeling Central High School, Doyle also had a stellar four-year mat campaign at Allegheny (PA) College, where he became a Division III national qualifier and graduated in 1977.

Upon graduating, Doyle’s first coaching post was at Jefferson Union High School, where he served as head coach in wrestling. There he kept the school’s proud wrestling tradition going until moving to Buckeye South High School to initiate wrestling in 1985.

During his 16-year tenure at Buckeye South, which later became part of the Buckeye Local High School consolidation, Coach Dan Doyle had to start from scratch. Within only a few years the “Panther” wrestling program shined, winning back-to-back Ron Mauck OVAC Over-All Team Championships in 1996 and 1997, two OVAC Dual Meet Titles, and an appearance in the Division II Dual Meet Tournament.

A past president of the OVAC, Dr. Doyle is now the tournament director of the prestigious Ron Mauck OVAC Wrestling Championships held at the Wesbanco Arena. He is currently the OVAC Wrestling Commissioner. Furthermore, his wife, Cindy, and two daughters, Erin and Megan, all work the tournament on an annual basis. I would be remiss if I didn’t mention that Dan Doyle’s grandson (Erin’s son), Dylan Taylor, was a dynamo on the mats, winning the Ron Mauck OVAC Wrestling Tournament and two West Virginia State Championships.

A 1997 graduate of Buckeye Local High School, Sean was an Ohio All-State wrestler for his dad, and was named the Bill Welker OVAC Ohio Wrestler of the Year his senior season. He continued on the mats at Cornell University, where he was a three-year starter and member of two “Big Red” Ivy League Championship Teams. But this is just the very tip of the iceberg.

After his stint at Wheeling Park, Sean Doyle ventured into unknown territory: Wheeling Jesuit University. A wrestling visionary, Doyle initiated the “Cardinal” wrestling program in 2012, building the program into a potential national mat sport power before taking an administrative position.

Doyle put the mat program in good hands, passing the baton to Coach Danny Irwin, who then took it to the heights of a national prominence, with a runner-up performance in the NCAA Division II Championships in 2019.

Area mat aficionados would be hard pressed to name any other family who has totally dedicated their lives to the mat sport more than the Doyles. They have given their hearts and souls to the promotion of Ohio Valley wrestling.