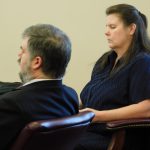 Photo by Robert A. DeFrank Karen Neff awaits her verdict Friday. She was found guilty of charges related to theft from the Belmont Memorial Park Cemetery.

Karen Neff was found guilty Friday on all counts related to the theft of almost $300,000 from the Belmont Memorial Park Cemetery.

After a four-day trial, the jury deliberated for about two hours and returned guilty verdicts for one count of forgery, one count of theft, and one count of securing writing by deception, felonies of the third degree, all for a sum of more than $150,000. The verdict was met with emotional outbursts from Neff’s family.

Neff, 48, of Powhatan Point, faces a maximum sentence of 9 years. She was taken into custody and will be held in jail without bond until sentencing.

Her attorney, John Jurco, asked that bond might continue until Neff’s sentencing.

“Although convicted of these three counts, she has had access to a large amount of money throughout the past years, and she has not absconded,” Jurco said.

“She has been found guilty of three serious felonies,” Vavra said in denying the request.

The cemetery is at 52950 High Ridge Road, St. Clairsville, near the intersection of Interstate 70. The 44-acre cemetery opened in 1937 with the main office located in Bellaire. The cemetery went into receivership in the 1950s and was run by a board of directors, which has since dissolved. Baratie and Neff had been caretakers.

The trial began Tuesday, with the prosecution stating it would present thousands of transactions in a document-intensive case to follow the financial trail. Belmont County Chief Assistant Prosecutor Kevin Flanagan said the state would demonstrate that Neff participated in selling the oil and gas rights on the cemetery ground for $282,000 in 2013, providing documents stating that Baratie was president of the Belmont County Memorial Park Association, and Neff was the secretary.

According to the prosecution, the state also called bank employees, store employees, law enforcement, and an oil and gas representative to testify.

The prosecution rested its case Friday. According to the court, Jurco called no witnesses and Neff did not take the stand.

Vavra thanked the jury for their conscientious and attention during the presentation of evidence.

“It was not an easy case. The testimony was tedious at some times, in terms of the line-by-line analysis of the bank accounts especially, but that had to go into the record and therefore it had to be done in that fashion,” he said.

Vavra added afterward that issues of restitution will be addressed during sentencing.