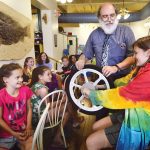 A simple gyroscope demonstration captivated the attention of nearly two dozen area girls Monday during the first of the two-day GEMS – Girls Enjoying Math and Science – Summer Camp at the SMART-Center in Wheeling.

The demonstration was designed to teach the students, entering grades fifth through eighth, a lesson about the moon’s gravitational force in relationship to the rotation of the Earth.

Led by SMART Centre Market owners Robert and Libby Strong, the campers engaged in a variety of fun science and engineering activities and experiments at the interactive science store located next to the Upper Market House. Libby Strong said this year’s camp is observing a lunar theme for the 50th Anniversary of NASA’s Apollo 11 lunar mission, which is being celebrated next month.

She said the math and science camp is the first of three summer camps, which also includes a “Fun with Engineering” camp in July and a “Fun with Physics” camp in August.

“This year is a really big deal because it’s the 50th anniversary of the Apollo 11 moon landing, so we are doing sort of a moon theme with all of our camps,” Strong explained.

She said they invited a local astrophotographer to share images of planetary and space objects that she took with her backyard telescope. In addition, she said they plan to examine the kind of rocks that would be found on the moon and study the chemical composition of the moon surface compared to the earth’s surface.

“We will be doing some safe chemical rockets (experiments) to help them understand a little bit about propulsion and things like that,” Strong said.

In addition, Strong said two GEMS camp alumni, who are now in college, are scheduled to share science/space presentations with the campers on Tuesday.

The GEMS camp, which was first held in 2005, allows girls to learn and have fun with other girls who love science and math, according to Strong. She said this is the third year in a row that funding for GEMS was provided by the Women’s Giving Circle of the Community Foundation for the Ohio Valley. She said the group’s generous grant allows all the campers to attend the two-day event free of charge. In addition, the students enjoy two snacks and a free hot lunch each day of the camp.

“We have been doing it for a long time and this year we were really grateful it was funded through a grant,” Strong added.