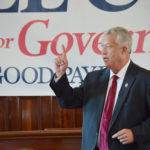 WHEELING –Republican gubernatorial candidate Bill Cole said the organized labor members who showed up to protest him during a Thursday campaign appearance at West Virginia Independence Hall should not blame him if they are unemployed.

“It wasn’t me that caused them to be out of work. It was the anti-business climate that created this,” Cole said of the protesters while addressing supporters and voters in the third floor courtroom.

Wednesday, a Kanawha County circuit judge issued a temporary injunction against the state’s new “right-to-work” law, basically suspending the law while court challenges to it are decided. Cole, who now serves as state Senate president, and other Republicans worked hard to pass the law, which makes it illegal for union membership and the payment of union dues to be conditions of employment, earlier this year.

“He comes here talking about promoting good jobs,” Doug Giffin of the International Brotherhood of Electrical Workers No. 141, said of Cole. “Give me a break.”

Giffin also said the combination of right-to-work and the repeal of the state’s prevailing wage law are allowing “out-of-state people to take West Virginians’ jobs.”

“It lets these companies come in and undercut wages,” IBEW member Art Oakland added. “I have been out of work since March.”

Cole, however, remains resolute in his position that right to work and the repeal of prevailing wage will ultimately benefit West Virginia workers by giving them more job opportunities. While speaking inside Independence Hall, Cole said he believes there are companies who had been planning to invest in West Virginia who will now wait to see if the right-to-work law is overturned, although he declined to identify specific industries or firms.

“The next governor, as he walks into office, will likely be facing a $350 million shortfall,” Cole said regarding the state budget. “We have big problems that need addressed. We need to refocus on what is the mission of state government.”

After the event, Cole said he wants to consider cutting back on state agencies that may duplicate services. He also said the state has 7,000 vehicles in its fleet, which he said may be too many.

Cole recognized the diversity of West Virginia, adding that in traveling to all 55 counties during the campaign, he has learned that each area of the state faces unique situations.

“We have a construction boom going on in West Virginia. Some of these are union jobs — some of them are non-union jobs,” he said.

Former Wheeling Mayor Andy McKenzie introduced Cole to the audience, which consisted of several elected officials, Republican candidates for office and members of the general public.

Cole congratulated McKenzie on bringing the soon-to-be-built Health Plan headquarters to downtown Wheeling, while acknowledging the relatively strong economy in the Wheeling area.

Cole said this is in stark contrast to coal-dependent southern West Virginia, an area he said has been devastated by President Barack Obama’s environmental policies. He said many in counties such as Mingo, McDowell, Logan and Wyoming are simply losing hope.

“We have to replace hopelessness with hope,” Cole said.

Cole, an auto dealer by trade, said he wants to be a salesman for the Mountain State.

“I want to go knock on a boardroom door and say, ‘This is West Virginia. This is why you need to be in West Virginia,'” he said.

Many Washington, D.C. Republicans continue disavowing presidential nominee Donald Trump, but Cole said he stands with the GOP contender over Democratic nominee Hillary Clinton, who he said wants to put more coal miners out of work.

“It’s important that we have someone nationally who is going to support our fossil fuels,” Cole said of Trump, who regularly speaks of putting coal miners back to work.