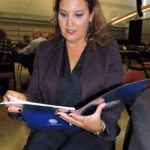 PITTSBURGH — Ohio Lt. Gov. Mary Taylor hopes to make history in 2018 by becoming the first woman elected to serve as governor of the Buckeye State, as the Republican said she is seriously considering a run to replace the term-limited Kasich.

During an interview at the Shale Insight conference, Taylor also discussed her differences with Kasich when it comes to supporting Republican presidential nominee Donald Trump, as well as the status of the PTT Global Chemical multi-billion-dollar ethane cracker project planned for Belmont County.

“I am exploring the opportunity right now to run for governor in 2018,” said Taylor , who took the role of lieutenant governor upon her election as Kasich’s running mate after the 2010 election. Prior to this, she worked as Ohio auditor for four years, while she served as a member of the Ohio House for four years prior to her term as auditor.

“I think we have accomplished a lot in Ohio. We need to continue heading in the right direction,” Taylor said, noting she plans to make a final decision on a gubernatorial run after this year’s presidential election.

Regarding the presidential race, Kasich has said it is unlikely he will vote for Trump in November.

“I plan to vote for Mr. Trump,” Taylor said. “We have a binary choice. I cannot see having another eight years of excessive regulation in anything that would even closely resemble a continuation of the (President Barack) Obama administration.”

Kasich is also now working alongside Obama to promote the Trans-Pacific Partnership, a new international trade agreement. The nations that would join the U.S. in the deal would be Vietnam, Mexico, Chile, Canada, Japan, Peru, Malaysia, Australia, Brunei, Singapore and New Zealand.

Trump is opposed to the TPP. Hillary Clinton originally favored the agreement, but has since said she now opposes it.

“That is a federal issue,” Taylor said when asked if she supported TPP. “I respect the governor and his role as the governor of a major state where industry is and could be significantly impacted by decisions made in Washington.”

Regarding the PTT project that could be built on the site of the former R.E. Burger power plant and additional acreage along the Ohio River in Belmont County, Taylor said she believes state officials have done their best to bring the massive project to Ohio. She believes as many as 10,000 construction workers would be needed to build the petrochemical complex.

“I would imagine, at this point, it’s going to come down to an internal decision about the numbers,” Taylor said, referencing the $100 million PTT leaders agreed to spend for engineering and conceptual plans.

Officials with the Thai firm are scheduled to make a formal decision on whether to proceed with the plant next year.

Although Taylor joins many eastern Ohio residents in supporting the Marcellus and Utica shale industry, some disagree with the premise that fracking is safe. Some recent studies indicate those living near fracking operations or compressor stations can experience breathing problems, while some believe the process may negatively impact water quality.

“The (Ohio) Department of Natural Resources has been testing water for decades. We’ve never had an incident where we’ve had any tainting of water,” Taylor said. “It is being done in a safe way. You can have common-sense regulations, and also protect people and the environment.”

Recently, both Ohio Sen. Lou Gentile, D-Steubenville, and Rep. Jack Cera, D-Bellaire, have worked on legislation designed to allow more of the severance tax revenue drillers pay on their oil and natural gas to stay in the counties from which they extract the minerals. The legislators’ belief is that because eastern Ohio deals with potential air and water pollution, in addition to road damage, in the presence of the industry, the areas along the Ohio River should keep more of the revenue.

Taylor did not indicate opposition to this idea, but said she did not believe it was necessary.