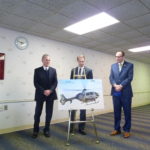 Albert Wright, president and CEO of West Virginia University Health System, said a HealthNet team and helicopter will be operating in Marshall County by July 1. He said it also will serve patients from the Wheeling area, eastern Ohio, Pennsylvania and Camden Clark Medical Center in Parkersburg, another WVU Medicine affiliate.

Clinton Burley, president and CEO of HealthNet Aeromedical Services, said the firm is in negotiations to house its helicopter at the Marshall County Airport, which is a three-minute flight to Glen Dale. He said HealthNet wants to place the aircraft at an aviation facility to protect it from the elements and to perform maintenance.

Dr. David Hess, CEO of Reynolds Memorial Hospital, said the hospital has an agreement with the Marshall County Board of Education for medical helicopters to land at John Marshall High School’s parking lot, near the Reynolds campus.

It takes 18 minutes to transport a patient by helicopter from Glen Dale to Morgantown, Burley said, adding the turnaround time for the helicopter “is typically less than an hour.”

If a second helicopter is needed at Reynolds before the first one returns to its home base, HealthNet would send an aircraft from one of its other nine sites, Burley said.

Regarding the need for having aeromedical service available to Reynolds’ patients, Hess said, “We want to be as much as we can be to this community, but we can’t be everything to this community.”

When a person needs critical care that cannot be provided at Reynolds, Hess said, the hospital wants patients to be able to be transported to Ruby as quickly as possible.

A twin-engine Airbus helicopter will be assigned to the new base.

Burley said it will have a fully equipped avionics suite and a medical flight staff that exceeds national standards. He added every flight will be stocked with two units of blood and a unit of plasma.

The partnership has been in operation for 30 years and has made 75,000 patient flights.

“Our goal as the land-grant university is to cover the state and to take care of folks all over the state,” he said.

Transfers of patients to Ruby have increased significantly in the past few years.

HealthNet Aeromedical Services’ other bases are located in Ripley, Huntington, Beckley and Lewisburg in West Virginia; in Portsmouth, Ohio; and in Martin County, Ky.