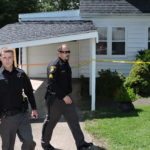 BETHLEHEM – A homeowner shot and killed a man inside his Bethlehem home Wednesday afternoon, but police are releasing few additional details.

Neighbors said police told them that someone inside the house shot an intruder during an apparent home invasion attempt. Wednesday. Troopers with the West Virginia State Police, which is handling the investigation, would not confirm those details.

“The owner of the residence shot Steven Headley. Medical personnel transported Mr. Headley to the Ohio Valley Medical Center, where he was later pronounced dead,” Trooper First Class C.W. Heckler said in the release. “At this time no arrests have been made and the investigation is still active.”

Police received report of the shooting at 2:19 p.m. At about 3 p.m., a man was removed from the residence and loaded into an ambulance, with medical personnel attempting to resuscitate him.

In addition to state police, the Bethlehem Police Department and Ohio County Sheriff’s Office responded to the scene.

For several hours, investigators seemed to be in a holding pattern as they waited for a judge to sign a search warrant. They obtained the warrant at about 7 p.m., and police cleared the scene by about 8:30 p.m.

Neighbor Paul Johnson said he has lived next door at 163 Ridgecrest Road for about 15 years.

“I’ve never known him to have any problems with anybody,” Johnson said of Jones. “He pretty much stays to himself.”

Upon learning that his neighbor and longtime friend was apparently unharmed, Johnson said he was tremendously relieved.

“That was my biggest concern, that my buddy was all right,” he said. “It was good to hear that, but that’s all the information I got from him — he’s OK. But that was good enough.”

Johnson said the neighborhood has always been a peaceful one, and Wednesday’s events wouldn’t change his perception. He purchased his house from his parents – who he said were so comfortable with the neighborhood they would leave their doors unlocked.

“I’ve got a security system, a little self-defense. I’m not overly concerned,” Johnson said. “You never know why somebody breaks into a place. … Some people get desperate for money to buy (drugs), and it seems like they’re spreading everywhere to get money to buy them.”