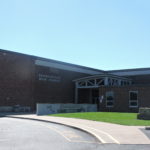 Barnesville High School is one local school that has armed staff members in order to protect students in case of an emergency. Photo by Adam Tychonski

BARNESVILLE — Teachers in some local schools are doing a lot more than making assignments and grading papers — they are also carrying firearms to protect everyone in the building.

President Donald Trump has said several times that he is in favor of putting guns in schools as a deterrent to an active shooter situation.

“I think a concealed permit for teachers, and letting people know there are people in the building with a gun, you won’t have, in my opinion, you won’t have these shootings,” Trump said a week after the Parkland, Florida, mass shooting in February. “Because these people are cowards, they’re not going to walk into a school if 20 percent of the teachers have guns.”

Some local schools are embracing the idea. During its July board meeting, the Cambridge School Board unanimously approved a resolution which allows certain staff members to be armed.

Under the cloak of security, school districts in 68 of Ohio’s 88 counties have armed teachers — many without telling the public. A growing number of districts, including Zanesville, Coshocton, East Guernsey, Cambridge and Edison Local, have made the decision to arm staff members.

Earlier this year, the Dayton Daily News reported that there were nearly 200 school districts with special response teams in place in 68 counties.

According to Edison Superintendent Bill Beattie, some staff members have undergone extensive training and are now armed during the school day. He said volunteers went through the intensive “Faster Saves Lives” training, a program specifically designed to prepare them to be armed in school. All of them also have gone through a mental evaluation.

“We just basically want people who are going to be coming into the building from the outside to know that we do have armed staff members in the building, and in the event that something happens they can use force to make sure that everybody in the building is safe,” Beattie said.

Arming staff is just one of many safety measures in place at Edison. Those who will be armed will remain anonymous, and weapons will be concealed at all times. The schools will also launch a cellphone app this year that will alert teachers to lockdown situations faster than ever.

The Barnesville Board of Education also passed a resolution in June giving the district the authority to appoint or have its designee appoint trained employees to carry concealed weapons on school grounds. Barnesville Superintendent Angela Hannahs said the district does have armed staff members in the schools. She also said Nightlock Lockdown door barricades recently were installed in classrooms and other rooms around the district in case of active killer situations.

All Barnesville buildings are in full lockdown at all times. There are video surveillance cameras spread throughout all the district buildings. There are 49 in the high school alone, with three of those being night vision cameras. The cameras can also be viewed and accessed by local law enforcement through the Navigate Prepared system.

Barnesville High School Principal Ron Clark said law enforcement can respond and be at the school location within three to five minutes. The district also has a safety committee that includes local first responders and meets monthly to discuss safety concerns. Each building has a safety plan that is certified each year and on file with the Ohio Department of Education and Homeland Security. Regular safety drills are conducted annually.

Clark mentioned that there are two full-time, armed school resource officers. Both officers are employed by the Barnesville Police Department. One officer works full time at Barnesville Elementary and the other splits her time between the middle and high schools, but Clark said the district is actively seeking a third resource officer in order to have full-time officers in all three school buildings. Clark also said there are radios in the schools that communicate directly with law enforcement.

Clark also remarked on the extensive training the selected staff members have to go through in order to be allowed to carry a firearm. He said they have to go through courses from the Ohio Peace Officer Training Academy, Force on Force training and training to navigate hallways safely and effectively in an active killer situation. Clark also said just having their concealed carry licenses does not permit staff members to carry in the schools. Staff have to be designated by the school board or its designee. Clark added that so far, the parents and residents have been supportive of this issue, he said that most parents reaction was positive after they announced the arming of staff during the school districts open house.

“I think it’s a great idea to arm teachers. I want my kids to be safe when they’re away from me, and this is one of the ways that will work,” Jason Jackson, a parent of two Barnesville students, said.

St. Clairsville-Richland City School District Superintendent Walter Skaggs said his district performs active shooter drills just the same as it performs fire drills, once a month in every school. The schools also use the ALICE — or Alert, Lockdown, Inform, Counter, Evacuate — procedure, which provides preparation and a plan for individuals and organizations on how to more proactively handle the threat of an aggressive intruder or active shooter event. Whether it is an attack by an individual person or by an international group of professionals intent on conveying a political message through violence, ALICE Training option-based tactics have become the accepted response, versus the traditional “lockdown only” approach.

Skaggs also said the district does have an armed resource officer in the schools and holds active shooter activities every year for the Ohio State Highway Patrol, Belmont County Sheriff’s Department, St. Clairsville Police Department and various emergency medical personnel. Skaggs was unwilling to say if any staff are allowed to be armed.

“Let me just say if we did allow armed staff, why would I announce it or talk about it?” Skaggs said.

Switzerland of Ohio School Local District Superintendent Jeffrey Greenley also is reserved about the issue and said his district likes to keep the finer details of its security plan confidential “for obvious reasons.”

According to Sara Clark, legal counsel for the Ohio School Boards Association, school boards are not required to publicize whether they are allowing staff to arm themselves.