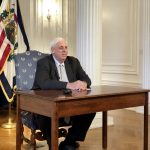 Photo by Steven Allen Adams Gov. Jim Justice explains why he is disappointed in the state Senate’s education omnibus bill. He said Tuesday he will veto the measure if it is passed.

CHARLESTON — Gov. Jim Justice made it clear Tuesday that he would veto any education reform package from the West Virginia Senate that includes charter schools and other controversial items.

Justice held a press conference Tuesday afternoon to announce that he wants to see a bill that includes the 5 percent pay raise for teachers and school service personnel that he proposed in October. He also stressed that Senate Bill 451, the education omnibus bill, was not his idea.

SB 451 is a comprehensive education reform package that includes the Justice pay raise and gives teachers a $250 tax credit and the ability to bank sick leave. It includes additional pay for math teachers, gives counties the ability to do differential pay for high-need subjects, and allows counties to raise levy rates. Justice said he was open to looking at these proposals.

Controversial provisions include creating a public charter school program, allowing parents to use education savings accounts for private or home schooling, eliminating seniority as the sole criteria for deciding reductions in force, requiring annual approval before unions can deduct dues from employee paychecks and provisions to dock teacher pay during a work stoppage. A provision to increase class sizes from 25 students per teacher to as many as 31 students was removed from the bill.

Justice said he adamantly opposes paycheck protection, charter schools and a provision of the bill — called nonseverability — which would render the entire bill invalid if any part of it is successfully challenged in court. He said if the bill ever passes out of the Legislature and to his desk, he will veto it — but he doesn’t expect the bill to make it that far.

Justice was reluctant to directly criticize Senate leadership for the bill, saying he has only had limited conversations about the bill with the Senate. He encouraged lawmakers and union officials to keep an open mind on education reform.

Justice’s comments were well received by union leaders in the audience. West Virginia Education Association President Dale Lee, a member of a group of six unions and school employee associations, said he was “thrilled” with the governor’s remarks.

“The governor has every right to express his opinions,” Carmichael said. “I honestly feel that he is mistaken. If you want to change this system, if you care about our children and our kids and their education process, you will want to approach this and not hold everyone back from doing a fundamental overhaul of our system.”

All 34 senators will meet later this morning as the Committee of the Whole, a parliamentary procedure used only three times in the state’s history, to discuss the bill as a super-committee. The bill originally was supposed to go to the Senate Finance Committee after passing the education committee last Friday. Two members of finance — Bill Hamilton, R-Upshur, and Kenny Mann, R-Monroe — expressed through social media and media reports that they are opposed to the bill, meaning the finance committee did not have enough votes to pass the bill.

Carmichael would not confirm that is why the bill was moved to the Committee of the Whole. He said this process would allow members of the finance committee, as well as all other committees, to hear the details about the bill at once, ask questions and hear testimony.

Should the bill fail, Carmichael said the Senate is still committed to passing the 5 percent pay raise for teachers and school service personnel, but he hopes his fellow lawmakers and the governor will support the Senate Republicans’ education reform efforts.