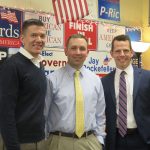 WHEELING — West Virginia needs teachers, and some students at Wheeling Park High School indicated Monday they might consider education as a career if the pay were better, and there were financial incentives in place to help pay for their college tuition.

West Virginia senators Ryan Weld, R-Brooke, and William Ihlenfeld, D-Ohio, addressed students in history teacher Ryan Stanton’s class Monday. They sought the students’ input on what the Legislature can do to improve schools as they prepare for a special session on “the betterment of education” in West Virginia.

The students spoke of how in some classes they have permanent substitute teachers as the school district continues to seek permanent qualified teachers for vacant positions in math and science classes. The West Virginia Department of Education reports more than 700 teaching positions remain vacant across the state.

Many in the class told the senators they might be interested in being teachers, but a teachers’ salary would not be sufficient to repay the debt they’d likely acquire.

“One of our priorities is filling teacher positions,” Ihlenfeld told the students. “One of the things I think we should do when we go back to Charleston is to create incentives so more people like you would go on to become teachers.”

He asked them if a program similar to the Promise Scholarship geared specifically for those pursuing education degrees might be a good idea. Participants would receive free tuition at a West Virginia state college or university, but would be required to maintain a specified grade point average and teach in the state a minimum of five years after receiving their degree.

“We wouldn’t want to give you a free degree, then have you go teach in Ohio,” Ihlenfeld said. “That doesn’t help us fill all those slots.”

The students agreed they would be more likely to pursue a career as a teacher if they didn’t have to worry about college debt.

The senators asked the students present what career path they presently wanted to pursue. One said she wanted to major in music technology and become a music therapist. Another student wants to be an electrical engineer focusing on computer science, while others want to be criminologists, investigators and writers.

One young man wanted a career in recreational tourism, and the senators told him that was something that was needed in the state at this time.

The students praised Ohio County Schools’ move toward a 10-point grading scale, setting a 90 percent average as the baseline for an “A.” They said this allows them to compete more competitively in college admissions with students in other states that also use the 10-point scale, and they said it should be implemented throughout the state.

They said the state also should move to increase career technology opportunities, which allow many students to come out of high school with a job and no need to attend college.

There is no need for schools to push college for everyone, according to the students.

Weld spoke of some in his own family who are brick layers, “and do very well for themselves” without a college degree.

“College is not for everybody,” he said. “You can do very well for yourself if you have a talent or a trade. I agree with you. There is too much of a push toward college.”