Archbishop Lori: Mistake Not to List Priests Who Received Gifts From Bransfield 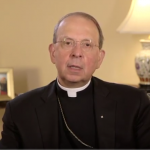 WHEELING — Archbishop William Lori on Friday said he made a mistake in asking that his name and those of 10 other powerful Catholic bishops and priests who received financial gifts from former Wheeling-Charleston Diocese bishop Michael Bransfield be omitted from a preliminary report.

In an 8-minute video posted by the Diocese, Lori, who serves as apostolic administrator of the Catholic Diocese of Wheeling-Charleston, addressed the matter after a Washington Post report revealed that Bransfield gave more than $350,000 in personal gifts to other priests — including Lori — and then had his compensation from the Diocese increased to cover the costs of the gifts.

The preliminary report said the personal gifts from Bransfield were part of a larger pattern of “excessive and inappropriate spending” that took place at the Diocese during his 13 years as bishop. Some examples include $2.4 million in travel by Bransfield — much of it personal travel — along with $4.6 million in renovations to his private residence — a home that soon will go up for sale, Lori said earlier this week.

“Friends, there is no excuse nor adequate explanation that will satisfy the troubling question of how bishop Bransfield’s behavior was allowed to continue for as long as it did without the accountability that we must require for those who have been entrusted with so much, both spiritual and material, as bishops and pastors,” Lori said in the video. “To that end, I wish to address my own receipt of financial gifts from bishop Bransfield who sent what I took to be gifts from him that were personal and given on occasions over the years mostly at the holidays and including my installation as bishop.

“… News coverage has also reported that I asked that my name and the name of other bishops who received similar financial gifts over the years from bishop Bransfield be omitted from the final text of the preliminary report. At the time I believed it would be a distraction to select particular individuals for identification who had received gifts, and then it would raise questions as to why we selected some individuals and not others. The basic point the report tried to make was that gift-giving was part of bishop Bransfield’s excessive spending and that this point could simply be made by indicating the totals and the categories of peoples who received gifts. None of the members of the investigative team objected to this and the changes were made.”

Lori said in retrospect, the names should have been released.

“But if I had to do it again, especially at a time when we’re trying to create greater transparency and accountability, the report would have contained the names of those bishops who received gifst – including my own – with some notation that there was no evidence to suggest that those who received gifts reciprocated in any way that was inappropriate,” he said.

“Transparency also includes admitting when a mistake in judgment has been made. That is certainly the case here.”

The Washington Post’s reporting of the preliminary report to the Vatican also found a lack of internal controls in how the Diocese monitored Bransfield’s spending. Lori also addressed this matter in the video, noting he has been working with the finance council to ensure such a situation doesn’t happen again.

Lori closed by asking the faithful for prayers for the appointment of a new bishop that can start the healing process in West Virginia — a new bishop that will “embody Christ’s spirit of humility, compassion, care and concern, and service.

“Friends, this cannot happen soon enough. But in the meantime, I do ask you humbly to pray for, and to do all that you can, to assist us in working toward a healing that is so needed in these difficult days. We cannot allow ourselves to be distracted from the urgent work of the faith, nor from our commitment to living and spreading the Gospel of Jesus Christ. At the same time, we will not relent in our determined efforts to bring about the reform and renewal of the church, and to restore the credibility, confidence and trust of the faithful in those of us who are charged with the awe-inspiring responsibility to lead, shepherd, and most of all to serve, with true Christ-like humility, care and concern for others.”