Nova Southeastern Is A Sleeping Giant 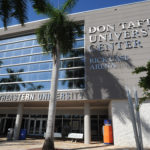 WHEELING – Who and what is Nova Southeastern University, and where can it be found on a map of the United States? Those were the popular questions when it was announced last week that highly successful West Liberty men’s basketball coach Jim Crutchfield was leaving the hilltop and making NSU his destination.

For starters, Nova Southeastern is not in any way affiliated with Villanova University. Secondly, you won’t find any hills or snow on campus, but you are likely to encounter palm trees and bikinis.

It’s home to a diverse student enrollment of 25,000, with 1,200 being international students that come from 116 countries on five continents.

Currently NSU, a private non-profit university, consists of 18 colleges and schools offering more than 175 programs of study with more than 250 majors. The school, which has an annual tuition cost of $27,660, has produced more than 170,000 alumni.

The university was founded in 1964 as the Nova University of Advanced Technology on a former Naval Outlying Landing Field built during World War II. In 1994 the school merged with Southeastern University of the Health and Sciences and assumed its current name. Its endowment is listed as $102.7 million.

Nova Southeastern is classified as a Doctoral/Research University Carnegie Foundation and was ranked by the Washington Monthly as the 259th-best national university. In 2000 and again in 2014, Nova was ranked third for the highest debt burden amongst its students. In 2014, NSU carried the highest debt load compared to all other students at non-profit universities.

“You have to have a 3.0 grade-point average just to get in,” Crutchfield said. “Under grad is about 9,000 students and there are 16,000 in the various graduate programs — they pretty much have one for anything you want to do.”

NSU boasts a vibrant campus life and only “highly credentialed” professors teach class — no teaching assistants. The many grad programs include but are not limited to medicine, law, psychology, business, education, pharmacy and dentistry. Undergrads participate in research in fields such as medicine, oceanography, cancer, psychology, dentistry and autism.

Nova Southeastern describes its mission as being able “to offer a diverse array of innovative academic programs that complement on-campus educational opportunities and resources with accessible distance learning programs to foster academic excellence, intellectual inquiry, leadership, research, and a commitment to community through engagement of students and faculty members in a dynamic, life-long learning environment.”

The list of notable alumni includes a plethora of judiciary heavyweights on the federal, state and local levels, as well, as Stacy-Ann Fequiere, a finalist on “America’s Next Top Model”; actor Seth Gabel; celebrity dermatologist, winner of “Big Brother” and star of “Dr. 90210”, Dr. Will Kirby. Major League Baseball players J.D. Martinez, Michael Fiers, Dee Gordon and Miles Mikolas are all former Sharks.

Athletically, Nova Southeastern has excelled in just about every sport. The baseball team is the defending NCAA Division II national champion. The women’s basketball program reaches the regional level nearly every season. Though the university does not offer football, it does have an indoor facility the NFL’s Miami Dolphins call home.

About the only place NSU hasn’t seen athletic success, is in the men’s basketball program. Believe it or not, that is one of the things that attracted Crutchfield, who posted a 359-61 record at West Liberty.

“This is a challenge that is a 6-20 team that has the potential to be good,” said Crutchfield, who on more than one occasion has referred to the school as a sleeping giant. “Some anxiety comes with this decision.

“I’ve never been afraid to do things like this, but I think as you get older change does get tougher.”

In addition to having talent-rich Florida to recruit as an advantage, Crutchfield will be coaching in the 4,500-seat, state-of-the-art Rick Case Arena. It’s part of the 366,000 square-foot Don Taft University Center, which includes a wellness and fitness center, performing and visual arts wing, food court and the Flight Decks – NNSU’s student lounge.

The facility also plays host to many events for the South Florida community and features a three-story, undersea mural by renowned marine artist and scientist Guy Harvey that spans the length of a football field.