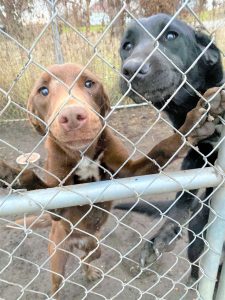 Two dogs stick their snouts through a chain link enclosure at the Fairview property where 40 animals were seized Tuesday night.

FAIRVIEW – About 40 animals — including dogs, cats, chickens and a goat — were seized Tuesday night from a Fairview home by the Belmont County Animal Rescue League.

“We had been there before with the sheriff and things had greatly declined since the last time we had been there. Apparently it continued to go downhill. We needed to step in at that point,” said Jennifer Woollard, executive director of and humane officer for BCARL.

Woollard said she still is working on the necessary documentation and photos for submission to the prosecutor’s office for possible criminal charges to be filed.

Volunteer Jessica Jacobs said the property is located on Fair Avenue in Fairview. Most of the dogs and cats are being housed in BCARL’s new facility, the former Sunset Motel that is being renovated for the league. The goat is being fostered at a farm.

“When we arrived at the location, we could see the animals were definitely not fed or watered that day; it appeared not for multiple days. The dog bowls were buried in mud and the animals were not receiving any care, Woollard said.

“There was no straw. There was mud and feces. When we entered the home, it was what I would consider a toxic situation with people living inside and no food or water for the animals. There were no litter boxes for cats,” Woollard continued. “These were deplorable conditions we encountered.”

An unrelated seizure case that occurred last Friday in Barton involved 18 animals, all dogs and cats.

In that case, a minor child also was removed from the home by authorities. Woollard said she also is working on the necessary documentation for the prosecutor in that case as well.

“We’re seeking help from fosters and rescue leagues, and we’re trying to get some adopted as well. Right now the animals we still have in possession need ’round-the-clock daily care: feeding, water, walking and cleaning,” Woollard said. “All this stuff needs done.”

“Reach out to rescues or shelters. Sometimes there are waiting lists, but waiting is better than putting animals into a worse situation. If they need immediate care or your having a hardship and need help with food on a temporary basis, there are people who can help with that as well,” Woollard said.