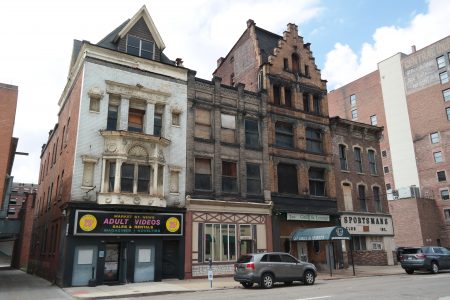 Mostly-vacant, city-owned buildings are shown in the 1400 block of Market Street, a site that the city plans to transfer to developers interested in rehabilitating the 19th century structures.

WHEELING — The city is moving forward with plans to transfer a row of mostly-vacant buildings that it owns on Market Street to two developers interested in rehabilitation.

Wheeling City Council’s Development Committee on Tuesday directed city staff to draft a memorandum of understanding that would outline an agreement to transfer the four buildings, located on the 1400 block of Market Street.

The developers, Arizona-based couple Ryan and Nikki Stoker, plan to rehabilitate the structures after working with Wheeling Heritage to determine that doing so was feasible.

“We know from several years of showing the city-owned 1400 block properties to developers that they are very challenging buildings that do not offer an attractive return in the traditional development context,” Mayor Glenn Elliott said. “What makes me cautiously optimistic about the Stokers’ proposal for these properties is that they have the wherewithal to take on a significant portion of the rehabilitation work themselves.”

The Stokers submitted a proposal to the Development Committee in September. They aim to purchase the buildings, located from 1425 to 1437 Market St., from the city for a nominal fee and would spend $500,000 to $600,000 on the initial phases of the project, Ryan Stoker said previously.

The committee directed city staff to structure the MOU to give the developers time to demonstrate their ability to “bring these buildings back to life,” Elliott said.

“This may be the last realistic chance that these four historically significant buildings have,” Elliott said. “If we do nothing, we will quickly reach a point where demolition by the city is the only viable option.”

The agreement will be structured so that if the developers meet certain benchmarks over the next year to 18 months, the city will contribute money otherwise scheduled for demolition toward roof replacement for 1437 and 1429 Market St., Elliott said.

The Stokers plan to develop the lower floors of the buildings into retail space and the upper floors into apartments. They also plan to move into the first apartment that they develop on Market Street and open their businesses — a “med spa” and a furniture business — on the site.

From the city’s perspective, Elliott said, restoring the properties with retail and apartments would generate additional sales, property and business and occupation tax revenue. It would also preserve an important part of downtown Wheeling in the same block where West Virginia Independence Hall stands, he said.

The structures are in poor condition, and the backs of several of them have collapsed. However, after connecting with the Stokers, Betsy Sweeny, historic preservation manager at Wheeling Heritage, determined that the buildings are structurally sound enough to conduct repairs largely due to the quality of timber and strength of masonry used when they were built in the late 19th century.

The buildings require various repairs, such as major structural work and roof replacements. Ryan Stoker said he first plans to replace wall studs with galvanized steel in 1429 Market Street, which has seen major water saturation, and improve the buildings’ facades.

Elliott added that the prior City Council authorized the purchase of three of the four properties. Current council members opted to purchase 1437 Market St. in 2016 to get control over the full site for future development options, such as rehabilitation or demolition.

“While the current City Council generally has a preference for saving historic properties where possible, we have never ruled out the concept of demolishing these buildings and delivering a clean site for new construction,” Elliott said. “We simply have not had any serious interest in doing so.”