Beloved statue sent away for restoration 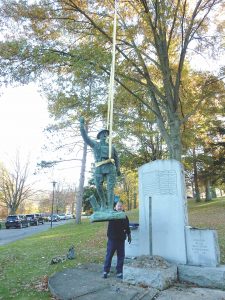 Photo by Linda Comins Professional restorer Giorgio Gikas watches as the Doughboy statue is hoisted from its base to a waiting trailer in Wheeling Park.

WHEELING — The World War I Doughboy statue at Wheeling Park has embarked upon a long, restorative journey this Veterans Day weekend.

The iconic statue — officially named “Spirit of the American Doughboy” — was removed from its pedestal Friday morning to be transported to Detroit, where it will be repaired and restored by Giorgio Gikas, owner of Venus Bronze Works Center for Conservation, and his assistants. He said the work will be completed in the spring of 2020.

Anonymous donations have been given for the project to honor all soldiers from Wheeling who fought in World War I. Sean Duffy and Margaret Brennan, members of the restoration committee, said rededication of the monument is planned for Memorial Day.

It took about an hour to loosen the 88-year-old figure from its concrete base and hoist it by crane onto a trailer where it was secured and wrapped in protective material. Committee member John Hargleroad, driving an SUV with the trailer attached, then departed to deliver the Doughboy to Gikas’ studio in Detroit.

Gikas opened his own business in 1984. Previously, he worked on restoration projects with family members since 1972.

“I have restored seven or eight or more Doughboys all over the Midwest,” Gikas said. The statues were created by sculptor E.M. Viquesney in the 1920s and 1930s.

The Wheeling Doughboy, which was dedicated on Memorial Day in 1931, is made of pressed copper, Duffy said. The figure “weighs less than 250 pounds,” Gikas added.

Restoration will include filling any cracks, removing dents, repairing other damage and replacing the soldier’s missing rifle, Gikas said.

The final step will be applying wax to protect the surface.

The Wheeling Park Commission provided the crane to lift the statue and a crew to assist Gikas and his team. They encircled the figure with straps that were attached to the crane’s hook, then removed crumbling concrete underneath the statue.

The figure also was secured to its base by a metal rod inserted in one leg. Gikas was surprised that the rod was twice as long as those of other Doughboys. During the removal process, the figure broke free from the rusted rod, he said.

When the restoration is completed, the Doughboy will be returned to its familiar location in Wheeling Park, facing National Road near the park’s exit.

The old concrete will be removed and a new base will be installed, Hargleroad said. Landscape architect Andy Barger is designing the setting, which will include deer-resistant, low-height plantings.

“It will be a pretty generous area so wheelchairs can go around it,” Hargleroad said, referring to the improved site.

According to research conducted by the restoration committee, Viquesney claimed to have made at least 300 Doughboy sculptures, with at least one in every state.

“That number has shrunk to 134 in 49 states, and Wheeling’s is one of only four left in West Virginia,” the committee stated.