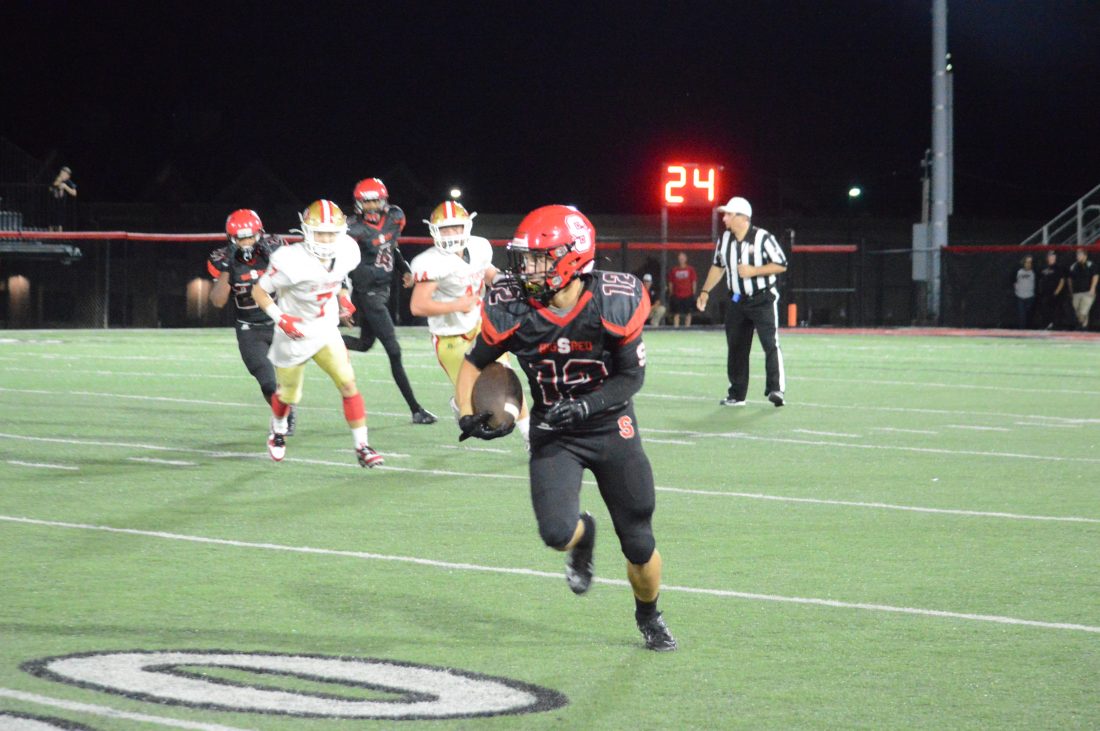 Photo by Mike McElwain Luke Zorne and Steubenville will travel to Aurora tonight for a Division III Region 9 quarterfinal showdown.

AURORA — Steubenville and Aurora both will be looking to play its best in tonight’s Division III, Region 9 quarterfinal showdown.

The kick for the second meeting between the traditionally strong programs is set for 7 p.m. inside Veterans Stadium.

“For us, the key is we need to play the best game we’ve played all year,” Steubenville coach Reno Saccoccia said. “Anything short of that and we are going to have a tough time.

Coach Frank Mihalik and his Greenmen, the fourth seed in the region, earned their first home playoff game since 2016 by going unbeaten in the regular season. In 2018, the Greenmen went 7-3 but missed the postseason, thus ending a run of 13 straight trips.

Aurora’s 10 victories came against the likes of Brush, Cuyahoga Valley Christian Academy, Twinsburg, Parma Padua, Tallmadge, Kent Roosevelt, Barberton, Medina Highland, Revere and Copley. The offense averaged 33 points in those wins while the defense has allowed just 47 points and recorded four shutouts. Padua is the only team to reach double digits against the Greenmen.

“That’s phenomenal. I’ve never heard of anything like that,” Saccoccia said. “Forty-seven points with a Division III schedule, it’s unheard of. Aurora’s defense is outstanding.”

He has committed to play at Ohio University. Barner has recorded a team-high 77 tackles, two sacks and nine tackles for loss. In addition, he has recovered three fumbles.

Outside linebacker James Austin leads the Greenmen with seven sacks. Senior defensive end Lenny Galaska has recorded more than 50 tackles. He also has more than 10 tackles for loss.

Aurora’s offensive attack is directed by quarterback Alex Moore. Moore, a sophomore, has passed for 1,355 yards and 16 touchdowns. He’s completed 94 of his 142 attempts and been has intercepted three times.

Johnny Papesh,a senior slot back, leads the team in receptions with 34. He has 661 receiving yards and 11 touchdowns. He also has a team-high four interceptions as a safety.

“Aurora is just a really good football team,” Saccoccia said. “The quarterback and running back both are outstanding. They also have talent upfront. They are well-coached and physical.

Players up front for Aurora, which is 10-0 for the first time since 1998, are senior Alex Hawk, senior Patrick Murray, senior Adam Hicks, junior Michael Sedar and senior Tucker Nietert.

Big Red, which went 6-3 during the regular season, is making its 19th straight trip to the postseason.

“You’re talking about a program that’s one of the most storied programs in Ohio,” Mihalik, who has compiled a 164-56 record in his years at Aurora, said. “It’s a tough first-round matchup.”

“They’re a run-first team with a dual-threat quarterback,” Mihalik said. “They’re physical. They do things that are more old school. They get under center and pound the football. It’s going to be a challenge for our defense.

“They attack differently than anyone we’ve seen this season. They use a lot of two and three tight-end sets. Lots of teams don’t even use the tight end anymore.”

Senior tailback Tayveon Crawford is Big Red’s offensive leader. In just nine games, he has rushed for 1,902 yards on 281 carries for 27 touchdowns. He averages 6.8 yards a rush. Crawford also has eight receptions for 71 yards and a score.

Randy Mitchell is Big Red’s dual-threat quarterback. He has completed 87 of 134 passes for 1,045 yards and 11 touchdowns. He also has 286 rushing yards, averaging 9 yards a carry. Also a three-year starter at corner, Mitchell has 29 tackles and three sacks.

Leaders on the defensive side of the ball for Big Red are senior linebacker David Tuttle, 97 tackles and three interceptions, and senior defensive end Niko Kausky, 65 tackles, six sacks and two fumble recoveries.

“Aurora has solid leaders on both sides of the football,” Saccoccia said. “A couple of their players are really good wrestlers and that’s a good combination to have.

“They’re an unbeaten team-a playoff team. They are the best team we have played so far this year and we need to come through with our best performance.”