Wheeling Central One Win From the Island

Another long trip awaits, this time to Pendleton County 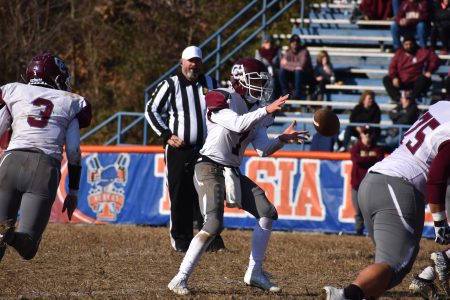 Photo by Cody Tomer Jacob Rine has stepped in and done a fine job as Wheeling Central quarterback under tough conditions.

FRANKLIN — On a good day the walk from Wheeling Catholic Central High School to Wheeling Island Stadium is about a 20-minute trek.

For veteran coach Mike Young and his Maroon Knights football team, a third consecutive trip to the Super Six on the Island could come to fruition Friday night, however, to get there Central will have traveled over 1,200 miles.

Friday night’s winner will advance to the Class A state championship game at 7 p.m. Saturday, Dec. 7 at 7 p.m. at Wheeling Island Stadium against either Doddridge County or Williamstown.

Young’s two-time defending state champions are coming off a 13-0 victory over No. 2 Ritchie County last week after dropping No. 7 Tolsia in the opening round of the playoffs.

“The kids did a real nice job last week in some bad conditions,” Young said. “But the conditions were bad for both teams. We were just able to control the football, eat clock early and do what we needed to do to advance.

“Our defense really stepped up. They have been playing well and I am very pleased about that.

“After this trip we will have logged over 1,200 miles in the playoffs. We went over 1,000 miles back in 2005 and got back to the Island, but this one is going to top that mileage.”

Meanwhile, fourth-year Pendleton County coach Zachary Smith’s Wildcats defeated St. Marys, 13-2, last Saturday after avenging their only loss of the season with a 26-7 victory over Moorefield to begin the playoffs.

“We have normally been on the road for the playoffs, so it has been nice to be playing at home this year,” Smith said. “We have had great turnouts from the community, and they have been very rowdy. It’s been phenomenal.

“It’s an amazing feeling to be playing at home and a big advantage for us not to have to get on the bus and make a long trip. It’s been a very special and exciting time for us regardless of what happens Friday.

“Going into August we knew we had a bunch of hard-working kids and we expected to be pretty decent, but as coaches we never expected anything like what is going on right now.”

Both teams had rough patches in their schedules late in the season with the Maroon Knights coming out a little worse for the wear. Not only did Wheeling Central drop three of four outings late in the season, all three of those losses came with all-state quarterback Curtis McGhee III watching most, or all, of the game from the sidelines.

Pendleton County had a stretch playing four Class A playoff teams in a row, Tygarts Valley, Parkersburg Catholic, East Hardy and Moorefield, and coming away with a 3-1 mark. The only loss was a 35-0 setback to Moorefield.

“Honestly, I think that loss to Moorefield was the best thing that could have happened to us,” Smith said. “We were not physically or mentally prepared to play that game and they took it too us. But we were a different team against them a couple of weeks later in the first round of the playoffs and we showed up.

“They came out and tried to be physical again and punish us, but our defense bent but did not break. Our defense has been outstanding in the playoffs and that Moorefield win really gave us momentum going into the St. Marys game.”

The Wildcats are led by junior quarterback Isaiah Gardiner who along with leading the passing game is the team’s leading rusher as well. Dalton Dunkle is right behind him in the rushing game while Javen Fawley and Colt Smith will also see carries.

Keinyn Lockard is the team’s leading receiver with Javin Kuykendall and Braden McClanahan also available in the passing attack.

The Pendleton County defense has not allowed more than 20 points in any of its 11 victories this season.

“They have a very nice quarterback who can both run and throw the football pretty good,” Young said. “But the running game opens up the pass for them. They are also very well coached and all you really need to know about them is that they are still alive in the final four and that says a lot about them.”

Senior quarterback Jacob Rine has turned into a fine game-manager for the Maroon Knights after taking over McGhee III. Through two playoff games Rine has completed 15 of 28 passes for 241 yards and two touchdowns, both to classmate Jalen Creighton who has 42 catches for 655 yards and 10 scores on the campaign.

Junior Jordan Waterhouse is coming off a 27-carry, 161-yard, one touchdown performance last week and went over 1,000 yards on the season. For the year Waterhouse has 144 carries for 1,076 yards and 10 touchdowns.

The Maroon Knights defense has allowed just one touchdown in the playoffs while opponents have scored just 18 points the last three weeks. The defense, led by two-time Huff Award winner Adam Murray, has also allowed 12 points or less in four of the last five games.

“There is so much tradition at Wheeling Central, we know it and everybody in the state knows it,” Smith said. “They have a phenomenal program and have piled up state championships.

“They are very well coached, have a lot of team speed and plenty of weapons, size and athleticism, even without McGhee in the lineup. (Adam) Murray is just an outstanding, impact player on both sides of the ball.

“We all know we are going to have our hands full and will have to play our very best to win.”

Young credits his players and coaches for making the Maroon Knights what they have become, but there is a little more incentive this time around.

“Getting this one means a little bit more because we want to do it for Curtis,” Young said. “This all means so much for these kids, these seniors and for Curtis. I have to give so much credit for the kids and their perseverance, and the coaches for how well they have game-planned and broke down film. Everyone wants to see this through.

“Sometimes you need kids to step up and make plays in situation and we have done a lot of that. I also can’t say enough about our offensive line and how much these kids have matured both on and off the football field.

“We lost some pretty special kids to graduation last year and we have still been able to get where we are right now, I think that says an awful lot about the character of these kids and coaches and this football team.”

Pendleton County, which opened its doors in 1998, has advanced to the state semifinals twice in school history, losing to Moorefield in the first year of the consolidation and to East Hardy in 2016.