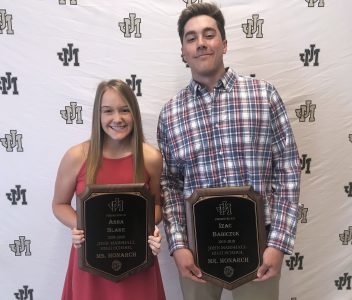 Izac Babiczuk and Anna Blake have earned the title of Mr. and Ms. Monarch at John Marshall High School for the 2019-2020academic year.

While at JM, Babiczuk lettered two years in football, three times in basketball, three years in baseball and one season in wrestling. He was a Kolivoda Holiday MPV and was chosen for the 2020 OVAC all-conference second team in basketball.

Babiczuk was a member of the Drug Free Club, Spirit Club, National Honor Society and participated as a Special Olympics mentor. He will join the Electrical Apprenticeship program this summer.

Blake’s high school sports accomplishments as a Monarch include being a four-year letter winner for basketball and softball.

She plans to attend WVU in the fall.

This annual award is based on a point system. Student athletes get credit for participating on a team while in high school. They also get bonus points for earning a letter in a sport, being named to an all-state team, all-conference team as well as their academic achievements.