Maroon Knights on the brink of state tournament 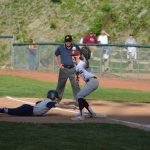 WHEELING — Charleston wasn’t on the Wheeling Central radar back in March. But fast forward two months and the state tournament is clearly in focus for the Maroon Knights.

The same two teams meet again at 5 p.m. today on the Rebels’ home field. Central wraps up a state tourney berth with a triumph. A Ritchie win would force a deciding game at 6 p.m. Wednesday at I-470.

“This team has just gotten better and better all season long. We lost seven starters from last year’s state runnerup team. We only have three seniors,” McConnaughy said. “I told them at the beginning of the season that I was going to coach them tough. They have bought in and we are playing the best ball of the season.”

Adam Murray is known as an all-state wrecking ball on the football field. The Maroon Knights junior is also a force on the mound.

Murray turned in an exceptional 72-pitch performance in silencing the Rebels bats. He struck out six, walked one and scattered four hits.

“My curveball was working well early and I spotted my pitches well. I got command of my changeup in the fourth inning,” Murray said. “I can’t say enough about my teammates. They made some really nice defensive plays behind me.”

Central scored the only runs it needed in the first inning, pushing across three on one hit. Avery Lee walked, stole second and scored on an error. After a walk, Jordan Waterhouse doubled in a pair of teammates.

Ritchie County starter Tatem McCloy settled in after the first frame. He pitched solid, yielding just two more hits until the wheels come off in the sixth.

Central, which tallied a run in the fifth via a walk, two ground outs and a wild pitch, opened the sixth inning with five consecutive singles en route to a six-run outburst, enacting the mercy rule.

“I thought their pitcher did a real nice job after the first inning. We went several innings without getting a hit. I just think he got a little tired in the sixth inning,” McConnaughy said. “I told our guys after the fifth inning that we have one more chance to break things open. Our bats came alive in the sixth.

“Baseball is a streaky game. You can go stretches without getting a hit then things just break loose. Adam pitched a terrific game. It was a solid win.”

Ritchie mounted one scoring threat all day. With two outs in the third, Eric Darnold and Eli Schriver produced back-to-back singles. Murray, however, snuffed out the uprising by inducing a routine groundball to third.

McCloy worked into the sixth inning, giving way to Darnold after the five straight Knights singles. He struck out four and walked three.

“We just had a couple of bad innings. We were little sloppy in the first inning and they took advantage of it,” Ritchie County coach Danny Vanoy said. “Central has a lot of speed and that caused us some problems. Murray also pitched well.

“I thought Tatem pitched a good game. I just think he got a little fatigued in the sixth inning. This team has done a nice job all year despite only having two seniors. We have a couple more pitchers we can use (today). We will be ready to play.”

Central finished with nine hits. Rine and Waterhouse were the only Maroon Knights to have two hits each.