Special Program Slated As a Salute to Steber 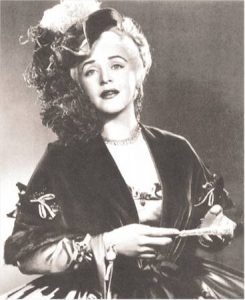 Photo Provided In a 1949 performance at the Metropolitan Opera, Wheeling native Eleanor Steber sings the role of the Marschallin in Richard Strauss’s opera, “Der Rosenkavalier.”

WHEELING — Randall Reid-Smith will present a special program about the life and career of Eleanor Steber at 10 a.m. Saturday in the auditorium on the lower level of West Virginia Independence Hall, 1528 Market St.

The program is free and open to the public. Reid-Smith is curator of the West Virginia Department of Arts, Culture and History.

Steber was one of the first American-trained opera singers to achieve international recognition.

Born in Wheeling in 1914, she won the Metropolitan Opera’s auditions in 1940, launching her career with a contract at the Met where she was one of its leading artists through 1961. Steber built a reputation as a versatile artist, with particular affinity for roles in operas by Mozart, Puccini and Richard Strauss and in French opera. She sang the title role in the premier of Samuel Barber’s opera, “Vanessa.” She commissioned and premiered Barber’s “Knoxville Summer of 1915” for soprano and orchestra. Outside of the Metropolitan Opera, Steber was a featured regular on television’s Bell Telephone and Firestone Tire broadcasts. She taught voice at the Juilliard School and at the Cleveland Institute of Music. She died in 1990.

Throughout her life, Steber visited and performed frequently in Wheeling. Her last performance with the Wheeling Symphony Orchestra was led by guest conductor Arthur Fiedler of the Boston Pops in January 1976.