West Virginia Independence Hall To Be Haunted by Spirits 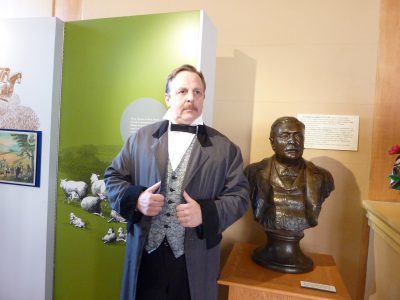 Tim Thompson, portraying Archibald Campbell, stands by a bust of the famous editor at West Virginia Independence Hall. For a “Spirits from the Past” program, he will describe the horrific Wheeling Wharf explosion of 1853. Photo by Linda Comins

Admission is charged and reservations by Oct. 15 are strongly suggested since attendance will be limited. The program is not recommended for children 12 and younger.

Costumed actors portraying “spirits” from Wheeling history will dramatically recount true events that have occurred in the city over the years. As is fitting for the Halloween season, the tales will include a murder, a disaster, reported hauntings and a robbery, with some humorous details. Each of the four presentations will be 10 to 15 minutes long.

Light refreshments will be served at the conclusion of the event. This event is a fundraiser for the WVIH Foundation.

“West Virginia Independence Hall, the birthplace of West Virginia, is not usually open after dark,” said board member Joe Laker. “We think this is a fun and informative way to bring visitors into this very historic structure while they learn about some of the more bizarre stories from our past,” he added.

The spirit of Archibald Campbell, the historic editor of The Intelligencer portrayed by Tim Thompson, will describe the horrific Wheeling Wharf explosion of 1853; Robert “Doc” Poole, portrayed by Walt Warren, will explain the gruesome murder of Adam Buch; weird occurrences said to have happened around Tunnel Green will be recounted by “Annie Greenteeth,” portrayed by Judi Hendrickson; and the spirits of two unknown thieves, portrayed by Dave Clutter and Dave Barnett, will describe the attempted robbery of more than $1 million from the Custom House safe during the Civil War.

To make reservations, call Judy Hendrickson, 304-232-5903. Checks are to be made payable to the West Virginia Independence Hall Foundation and sent to Judy Hendrickson, 1 Woodlawn Court, Wheeling, WV 26003. Payment will confirm a reservation. Tickets also may be purchased with cash or check at the hall.