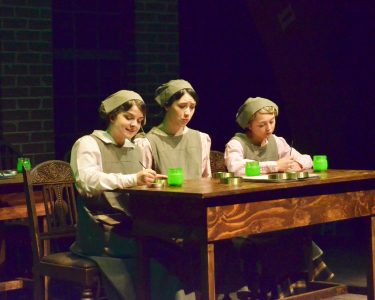 WEST LIBERTY — West Liberty University will have a special guest on hand for its student production of the play “Radium Girls” today — the playwright.

“We are thrilled that playwright D.W. Gregory is coming to campus to see the show and provide the cast, crew, and audience, with a ‘talk-back’ after the play on Friday night in Kelly Theatre. Everyone is welcome,” said Michael Aulick, WLU’s director of theater and also one of two directors of the play.

The other director is Maura Reiff, a recent graduate of WLU’s theater program who resides in Weirton and works in Pittsburgh.

“While D.W. Gregory may not be a household name, her play, ‘Radium Girls’ has been on the top 10 plays produced in the U.S. for two years in a row. We were excited to choose the title and even more excited to get such an important playwright to come to our campus,” Aulick said.

Based on a true story that happened during World War I, the drama is about female factory workers who suffered radiation poisoning due to the luminous paint they used on clock and watch dials.

“It’s a dramatic piece based on the real life of a group of young women who worked in a paint studio/factory in the 1920s. The paint they were using contained radium, and they painted with a technique of ‘tipping’ their brushes in their mouths. This resulted in many cases of cancer and death but the company never would admit their role in the illness, or help the girls with their medical bills. The show has provided us ample material to research and use for our production, it has been a really interesting process,” he said.

Radium was discovered by Nobel laureate Marie Curie and her husband Pierre in 1898 and in 1926 it was considered a miracle cure for cancer.

Inspired by a true story, “Radium Girls” traces the efforts of Grace Fryer, a dial painter, as she fights for her day in court. Her chief adversary is her former employer, Arthur Roeder, an idealistic man who cannot bring himself to believe that the same element that shrinks tumors could have anything to do with the terrifying rash of illnesses among his employees.

As the case goes on, however, Grace finds herself battling not just with the U.S. Radium Corporation, but with her own family and friends, who fear that her campaign for justice will backfire. Written with warmth and humor, “Radium Girls” is a fast-moving, highly theatrical ensemble piece.

The cast includes WLU sophomore Delaney Bird as Grace Fryer and Arthur Roeder as Dan White. Other student cast members play both a role and are in the ensemble are:

Tickets are available through Brown Paper Tickets online and at the door.