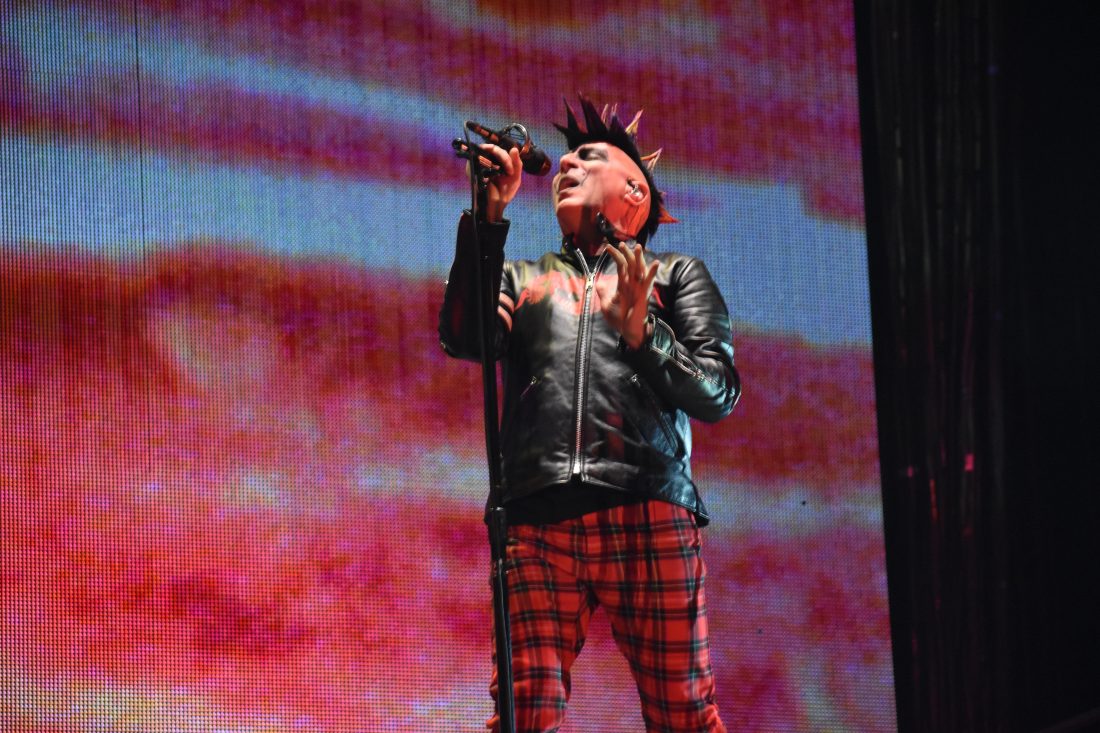 PITTSBURGH — PPG Paints Arena in Pittsburgh became the crossroads where fans of many different genres of music came together on Friday, Nov. 8, to celebrate a band that seems to be universally held in high regard for its sheer musical prowess — Tool.

Touring in support of the band’s meticulously crafted new album “Fear Inoculum,” Tool is back in full force and is on the road playing to crowds in sold-out arenas in cities across the country. Pittsburgh was no exception, as the band sold out the nearly 15,000-seat home of the Pittsburgh Penguins within minutes after tickets went up for grabs in early September.

More than 13 years had passed between Tool’s last studio album “10,000 Days” in 2006 and the new “Fear Inoculum,” which was released on Aug. 30 of this year. Eager fans had been chomping at the bit for new material, but over the past decade the band had been eyeballs-deep in widely reported legal battles over everything from album artwork to insurance company contract issues, delaying the already laborious writing process for which Tool has become known.

Leading up to the long-awaited release of the new album, Tool returned to the road more frequently in recent years, playing the Petersen Events Center at the University of Pittsburgh in 2017 and headlining the Rock on the Range festival in Columbus last year.

There was no rust to knock off when Tool rolled into Pittsburgh last week. The band didn’t let a lengthy hiatus between albums affect their abilities to deliver a tantalizing live show. On Friday, the band performed like a well-oiled machine, sounding tighter than ever. 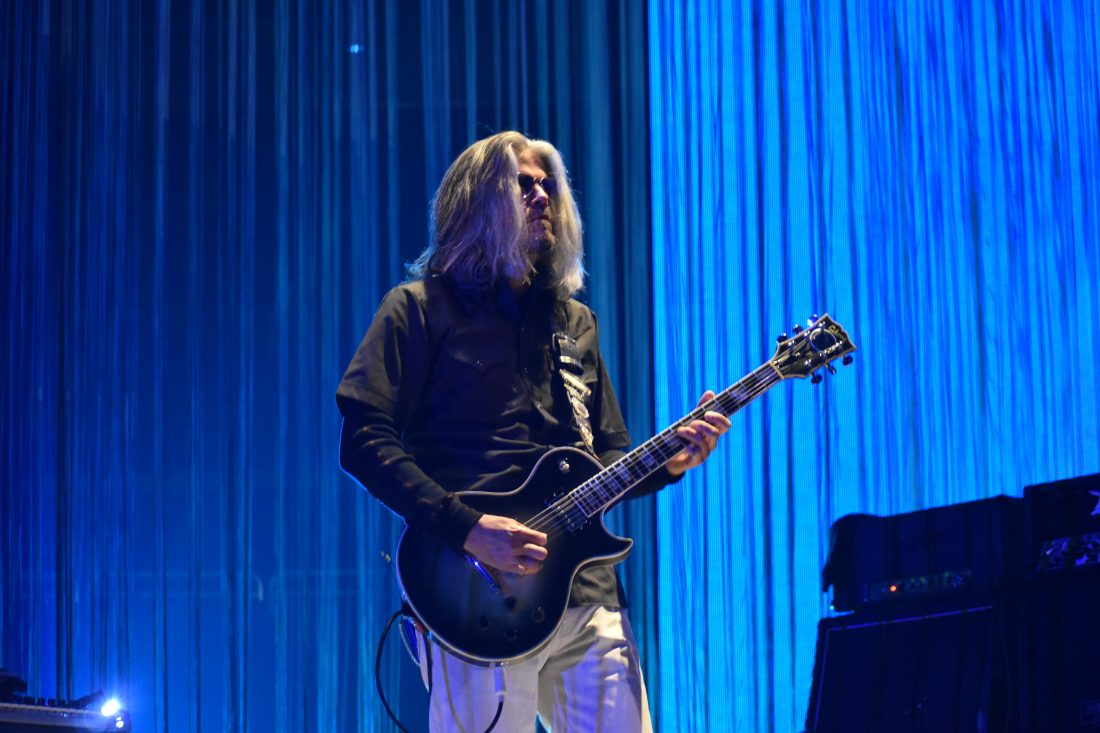 Classified by many as a ’90s progressive heavy metal band, Tool’s growth over the decades has seen its music evolve from a hard-edged and brooding industrial sound to a much more atmospheric and psychedelic one, with songs extending into intensely long instrumental ambiance. But still heavy. Listening to Tool’s musical catalogue in chronological order would be like setting a play list to start with the heaviest, most explosive Led Zeppelin tracks and eventually end with Pink Floyd.

The ever-growing fan base of Tool represents a cross section music lovers from many different walks of life. Many metal heads love Tool and consider them as being more at the highbrow, intellectual end of the heavy metal spectrum. Old school rock’n’roll fans who are into progressive rock like Rush or Yes also tend to love Tool because of their firm foot in that lane. It’s funny that a lot of fans from the hippie jam-band scene – those who love groups from the Grateful Dead to Phish – also are crazy about Tool, as are fans of Pink Floyd and other psychedelic rock music.

“Fear Inoculum” starts in that trance-inducing, ambient space and builds from there — and Tool opened last Friday’s show with that 10-plus-minute opus.

One thing that has remained constant through Tool’s evolution has been the band’s use of intricate time signatures, polyrhythms and polymeters. A huge reason why most people categorize Tool as progressive metal, Tool takes complex math-rock beats and turns it into calculus, but makes it sound effortless. Opposing beats layered on top of completely different ones creating fractal-like audio imagery.

Front man Maynard James Keenan’s unique vocal character has always seemed less like a traditional rock star and more like a college professor. Keenan has become the band’s reluctant rock icon — a figure many obsessive Tool fans idolize to excess and almost worship. For nearly two decades now, Keenan has performed in the shadows from a riser in the back of the stage adjacent to the drums, and often heavily disguised. During the last tour, he literally wore riot gear every night and was completely in the dark; the only chance fans got to see him was in silhouette when the sprawling video screens behind him provided enough back lighting. 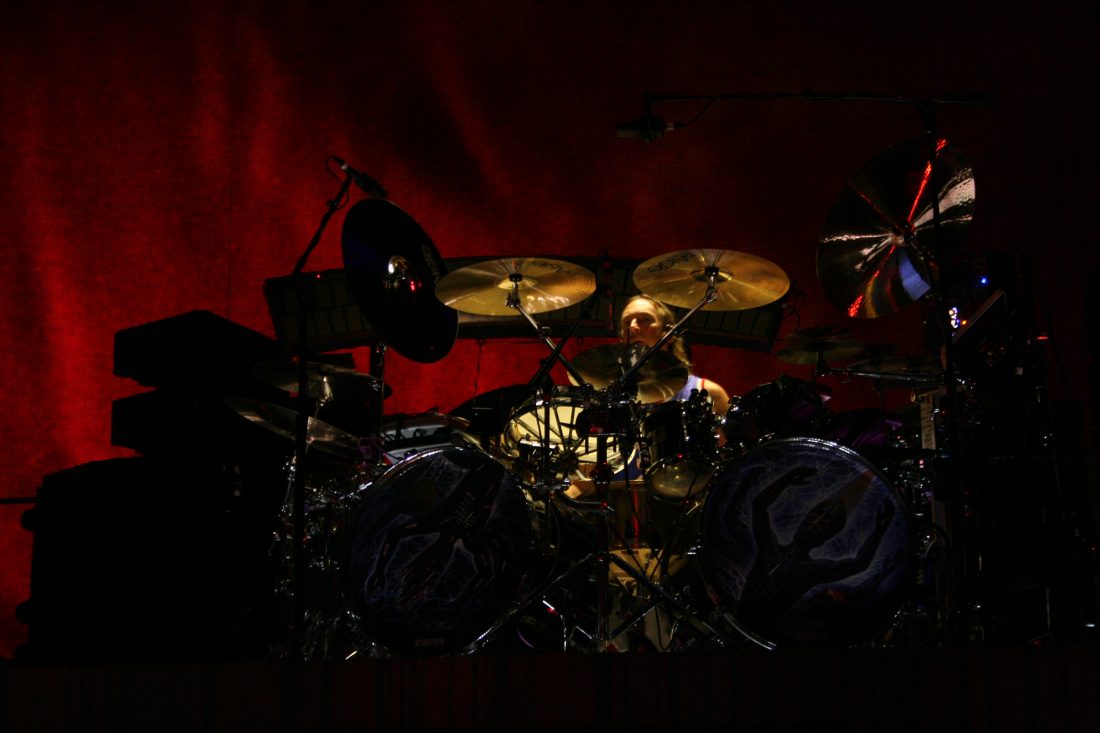 For this tour, however, Keenan seems much more engaged, although he still performs from the back row (he has said it sounds better from the back, and he no longer sees a need to perform as a “front man” when the music and the band as a whole are what bring people to the shows). He has been more visible on stage in sweeping light– crouching and lurching to the music on either side of the drum kit and sporting a huge spiked mohawk and face paint. After the show, he even bumped fists with his fellow band mates and came out to the front of the stage to thank the fans.

The other three members of Tool remained in the spotlight as the “Fear Inoculum” opener was followed by “Aenima” and “Parabola.” New songs like “Pneuma” seemed to fit in exceptionally well with older material in the set, as creepy, psychedelic videos rolled on huge video screens behind the band, and lights and lasers swept over the stage and into the crowd.

Another huge highlight for Tool is drummer Danny Carey, who is considered by many to be one of the best rock drummers in the business today. Carey flailed away behind a mammoth drum kit, showcasing his mad skills on several songs and during the instrumental “Merkaba” and the new track “Chocolate Chip Trip,” a drum solo used to kick off the second set of the show following a short intermission. The drum solo started on a huge gong that Carey machine-gun tapped using both sides of his drum sticks before moving to his elaborate kit, complete with an array of cymbals, organic and electronic drums, various percussion accessories, a mounted xylophone-looking section and more. In the world of great progressive rock virtuosity, Carey truly has taken the torch from rock icons like Neil Peart of Rush.

Guitarist Adam Jones has always seemed to play the role of the artistic visionary of Tool. Also a visual artist by trade, Jones has not only directed Tool music videos and supervised album artwork, but also has worked as a special effects artist and set designer in the motion picture and television industries. As a guitarist, Jones tends to have a minimalist approach to his writing and playing — much like Tony Iommi did with Black Sabbath. Although he typically uses only a few dark and stark colors in his musical palette, his dynamic riffing and industrial edge have always been key elements to Tool’s sound. 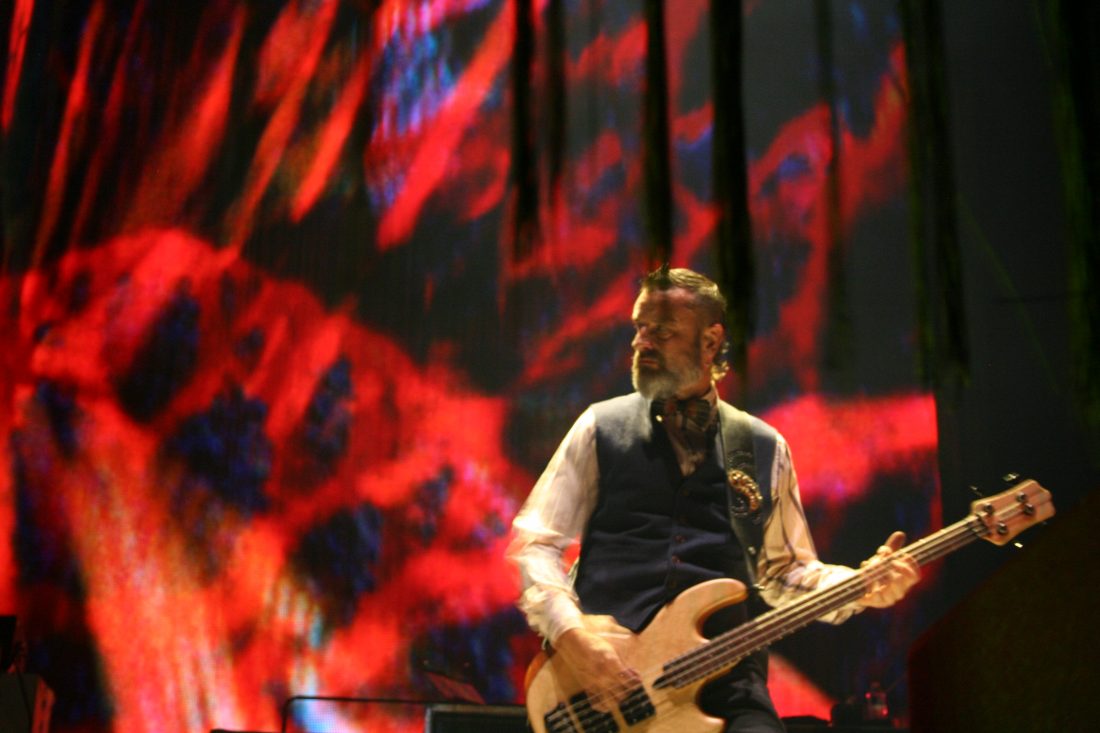 Jones took the spotlight on several occasions during the recent show, ripping through searing lead parts as weird light figures that looked like shower heads descended on him and showered him in illuminated baths of color. Jones also utilized a talk box for the solo in “Jambi” and played a small keyboard on one of the tracks from the new album.

Justin Chancellor has been Tool’s bassist since 1995. Although not the original bass player, Chancellor utilizes a similar tone as his predecessor Paul D’Amour, sustaining the signature throaty churn and rumble that complements the acrobatic interplay between the guitar and drum parts. His playing brings much more to the table than a simple bass line holding down the bottom end; Chancellor’s bass parts are cut through prominently like a lead instrument and carry the primary riffs in many of Tool’s songs. 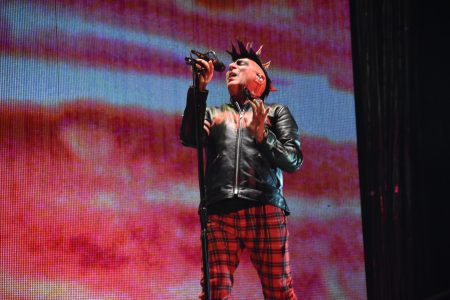 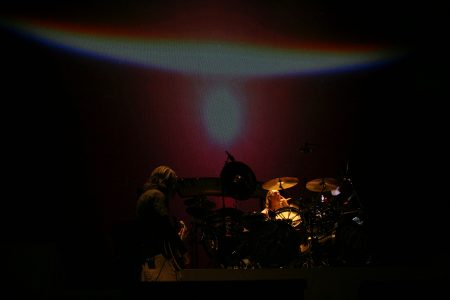 Adam Jones and Danny Carey, from left, of Tool open the show before a sold-out crowd at PPG Paints Arena Friday, Nov. 8, 2019, in Pittsburgh. (Photo by Eric Ayres) 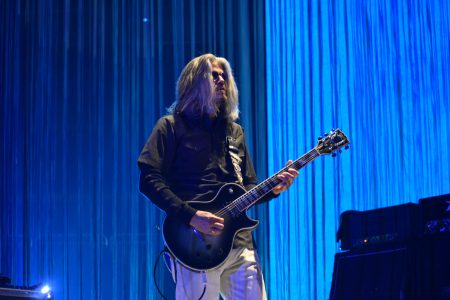 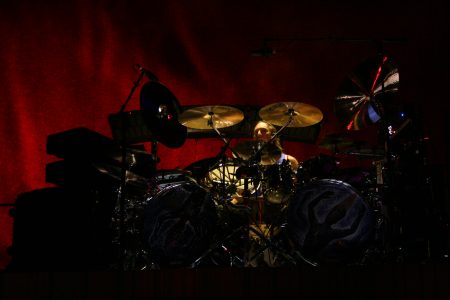 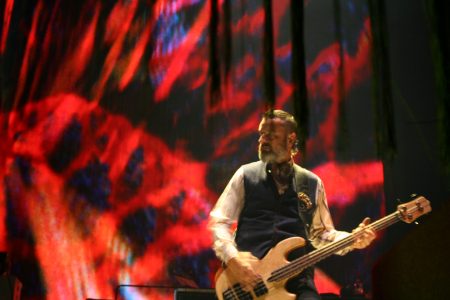 Chancellor’s stage presence is clutch to the band’s live show, too, as he is oftentimes the most animated figure on the stage, rocking back and forth as if the weight of his heavy bass lines take serious muscle to deliver.

The band was on point with new tracks “Descending” and “Invincible” woven between fan favorites like “Jambi,” “Vicarious,” “Schism,” “Forty Six & 2” and the show closer, an extended version of “Stinkfist.”

Fans were warned in advance with signs on every other seat, an announcement over the public address system and with advanced emails to ticket holders — use of cell phone cameras during the show would result in immediate removal from the venue without a refund. The last time Keenan was in town with A Perfect Circle, the same rule was implemented. And it was nice, because everyone in the sold-out crowd actually watched the show. 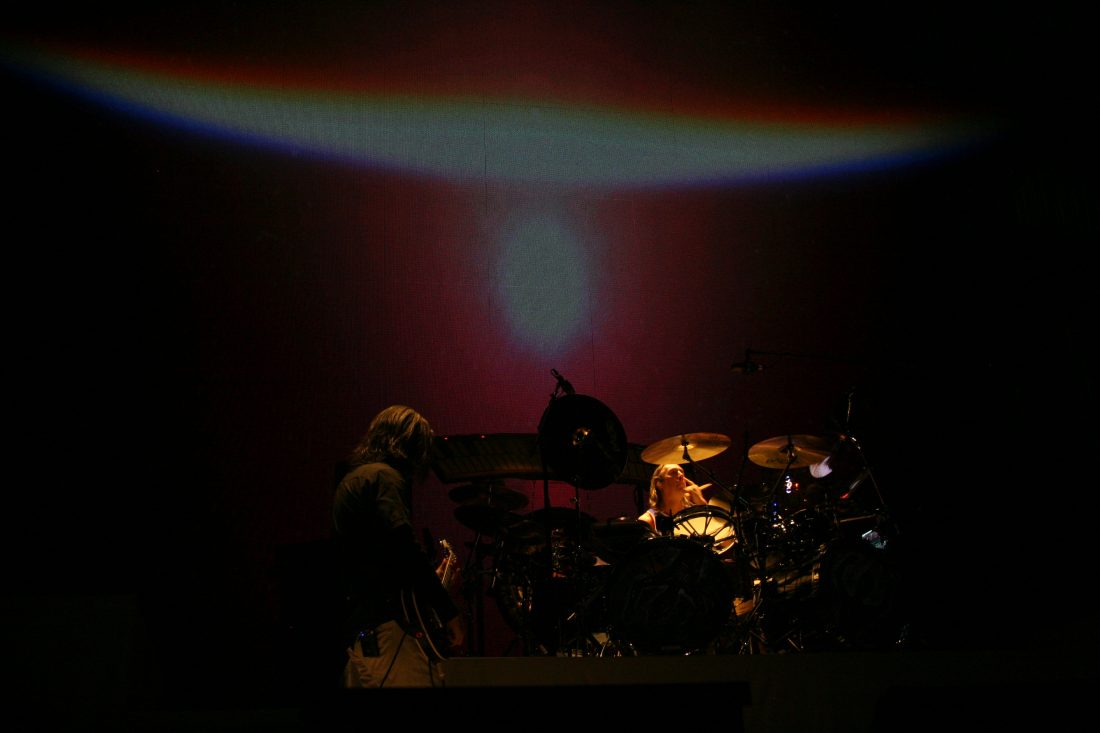 Adam Jones and Danny Carey, from left, of Tool open the show before a sold-out crowd at PPG Paints Arena Friday, Nov. 8, 2019, in Pittsburgh. (Photo by Eric Ayres)

Before the final number, Keenan thanked Pittsburgh for bringing ketchup to the world, and (I missed this, but he apparently) gave everyone permission to bring out their phones during the last song — and most people did so … to capture the moment just in case they needed help to remember what a great show it was.