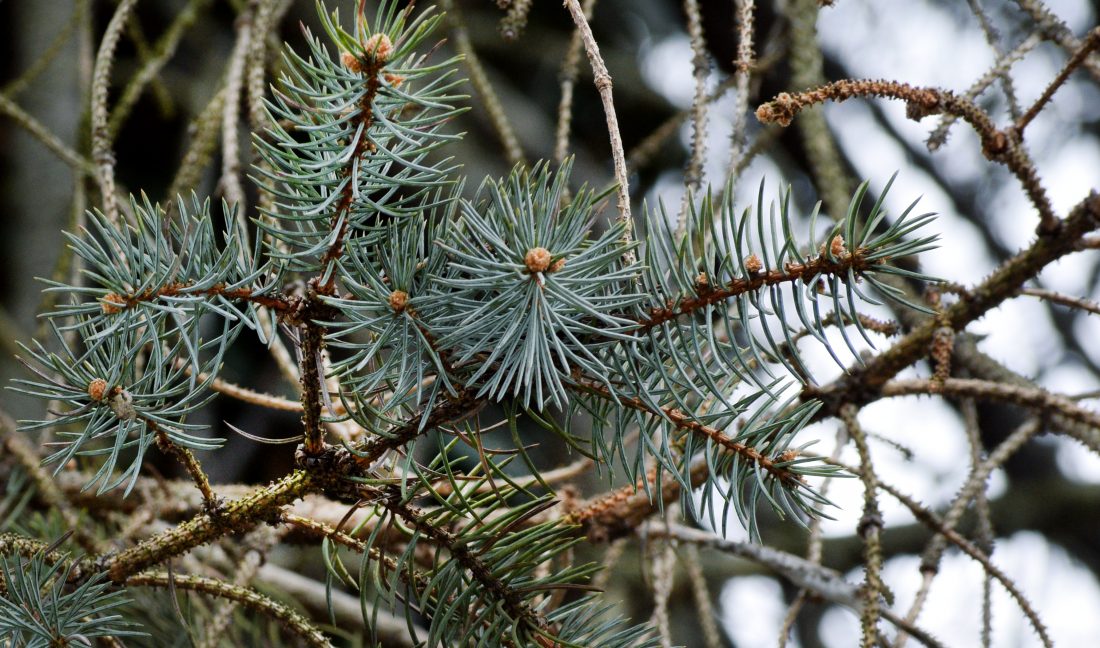 Photo by Scott McCloskey Many area Colorado blue spruce trees, like this one pictured in the Woodsdale neighborhood of Wheeling, suffer from the Rhizosphaera needle cast disease.

The Colorado blue spruce tree is very popular throughout the local region, but more of them have become susceptible to attack by Rhizosphaera needle cast disease over the past decade, according to Karen Cox, West Virginia University Extension Agent for Ohio County.

“The Colorado blue spruce is a very common landscape tree. It grows quickly and is beautiful to look at because of it’s pale blue color,” Cox said.

She noted the tree, which can grow up to 200 feet tall, is increasingly becoming threatened by pathogens and arthropods from this particular needle disease.

“The problem is it isn’t native to this region. … As a result, there is a fungus that tends to grow and attack the blue spruce in this area,” she said.

She said the fungus clogs up the circulatory system of the tree.

“If you take a magnifying glass … you can actually look at the needles and see little black specks on the bottom of the needles,” she said. “What you notice most is the lower branches die off. It’s a soil born fungus.”

Cox said the fungus can attach to the tree when it rains and water splashes onto bottom branches. She said blue spruce typically have branches near the ground. Classic symptoms of the needle cast include: brownish purple discoloration and eventual death of the needles and branch. But while the disease has become more and more visible in this region over recent years, it is treatable.

“So one of the things the homeowner can do before the tree gets infected is to prune off those lower limbs and make sure they are not touching the ground,” Cox explained.

In addition, it will help to remove any needles lying beneath the tree. She said these preventive measures will keep the fungus from moving up the tree.

“Typically what we will see is the damage in the lower limbs, which are typically ones we can reach,” she added.

Cox said this is a good time of the year to treat any blue spruce suffering from the fungus.

“So early spring or late fall you want to remove any potential places the tree can get reinfected,” Cox said. “So remove any lower limbs that have been dying back and remove the needles from the ground. … Also you can spray the tree with a fungicide, but if you don’t spray it at the right time, it’s not going to do anything.”

She recommends spraying the tree with a fungicide when the (new) needles are coming out and are approximately half the size of the adult needles — then reapply two to three weeks later. She said to make sure to follow the label directions when applying a fungicide.

For additional information about the disease, Cox said you can contact her by calling 304-234-3673 or emailing karen.cox@mail.wvu.edu.