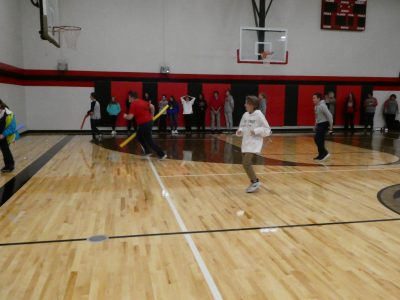 Bridge Street Middle School has a bright, shiny new floor in its gymnasium, and students have been encouraged to take care of it.

School officials called an assembly Friday to unveil the new floor, which was damaged by water in August. A clogged roof drain had caused the gymnasium to flood, ruining the floor and causing it to buckle.

Cost for the new floor was about $100,000, according to Ohio County Schools Assistant Superintendent Rick Jones. The school district’s insurance picked up the cost.

Work has been ongoing to repair the floor as the fall sports season happened.

Volleyball games involving the Bridge Street team had to take place at other locations, while most physical education classes took place outside.

Volleyball team members, as well as athletes on the school’s golf and track teams, were recognized during Friday’s assembly.

The teams, in turn, honored their coaches.

Principal Jessica Broski-Birch told the students she respected them, and she wanted them to respect her.

She also encouraged them to take care of and respect the new gym floor. Broski-Birch told them to think of the floor as something in their own home.

School officials had initially feared there was asbestos under the old gym floor. An assessment from Astar Abatement of Wheeling determined none was present.

Students at Bridge Street — which has the team name “The Devils” — also had to notice another big change in the gymnasium. The large red flames that previously adorned the walls now have been painted over, and instead the words “The Devils” have been engraved upon the new floor.