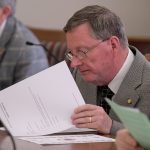 CHARLESTON — A new bill could help plug abandoned oil and natural gas wells that dot West Virginia’s countryside, but it could hurt the budgets of small counties.

HB 2673 would direct the state Department of Environmental Protection to use money collected by the fund to plug old and abandoned oil and natural gas wells and reclaim the property. Companies that produce a low volume of natural gas or oil would be exempt from severance taxes but would pay an annual 2.5 percent of the value of the gas or oil produced from their wells to generate money for the fund. Once the fund reaches $4 million, the companies would cease to be required to pay the annual fee. Any operator who refuses to pay the fee would have to pay a $1,500 civil penalty plus interest.

The bill applies to companies that produce between 5,000 cubic feet and 60,000 cubic feet of natural gas, or between one-half barrel and 10 barrels of oil per day.

According to a report prepared by David McMahon of the West Virginia Surface Owners Rights Organization, 4,000 oil and natural gas wells are considered “orphaned,” having been abandoned for so long that the wells no long have a responsible owner. McMahon said another 8,000 wells still have owners and are bonded but haven’t produced oil or gas for 12 months.

“The Legislature must find the money to plug the 4,000 existing orphaned wells, plus the thousands more to be orphaned that industry greed and irresponsibility and government complacency have and will cause to exist,” McMahon said.

West Virginia Code 22-6-19 requires “any well which is completed as a dry hole or which is not in use for a period of twelve consecutive months shall be presumed to have been abandoned and shall promptly be plugged by the operator in accordance with the provisions of this article, unless the operator furnishes satisfactory proof to the director that there is a bona fide future use for such well.”

Despite the bill’s good intentions, some county commissioners are concerned about the bill’s implications for smaller counties. Wood County Commission President Blair Couch was at the Capitol Building Tuesday. He said losing the severance tax revenue from smaller-producing companies could be devastating to county budgets.

“Anytime when there is a bill that might take away revenue from a county they are already getting makes our budgeting very hard,” Couch said. “For Wood County, that severance tax doesn’t generate a lot of income. If I had to guess, it’s probably about $20,000 or $30,000 (a year). But for counties like Doddridge and Mineral and Pleasants it’s a big chunk of their budget. Playing with that kind of revenue can hurt.”

Couch pointed out that counties only get about 10 percent of the 5 percent severance tax revenue, so eliminating the severance tax for wells that don’t produce much oil or natural gas would be a hardship for small counties.

“For Wood it’s not a lot of money, but for a ton of other counties it’s very critical for their operations,” Couch said.