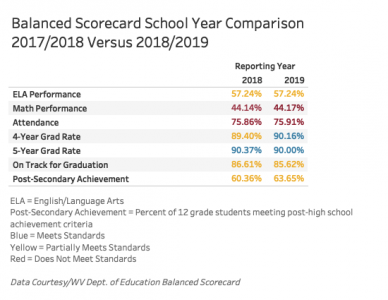 CHARLESTON– The second year of the state Department of Education’s Balanced Scorecard gives teachers, administrators, parents and the public an opportunity to track progress in English, math and many other categories.

While high schools were able to improve on some of the standards between school years, many schools are still not close to meeting academic standards, and some schools with high graduation rates also don’t meet standards for post-high school achievement.

The Balanced Scorecard first debuted last September, replacing the A-F Grading System after Gov. Jim Justice in 2017 railed against the accountability system. State Superintendent of Schools Steve Paine said even though schools are not getting letter grades anymore, the Balanced Scorecard provides even greater transparency.

“I think there was a bit of a misnomer that the Balanced Scorecard was going to be a lot easier. It’s not,” Paine said. “It’s doing exactly what we thought it would do, and that’s pinpointing our strengths and our deficiencies.”

Having both school years in the Balanced Scorecard allows for a comparison to see if schools are improving or falling backward.

However, the number of schools not meeting attendance standards increased from 30.5 percent in 2017-2018 to 38.6 percent last year.

“The overall message I think with this data is that we’re in year two of implementation,” Paine said. “There’s always an implementation dip, not to make an excuse. Anytime you implement something, sometimes there’s a dip. We didn’t see a dip except for attendance.”

Looking specifically at high schools – the last stop before sending a teenager off to the work force, a trade school or a four-year college or university – the comparisons of the last two school years show meager improvements.

To put it in perspective, out of 116 high schools, 99 schools are in the red for not meeting math standards set out by the state Board of Education. Only 16 high schools were in the yellow category for only partially meeting standards (data for Pickens Elementary/High School in Randolph County was unavailable).

Last year, the Department of Education launched West Virginia math4life to start reversing math scores in the state. The five-year effort will work with schools and teachers to develop plans to help students become better at math. Michele Blatt, assistant superintendent for certification and professional preparation, said math4life helped move the needle on the Balanced Scorecard in a positive direction.

“I give a huge credit to our math4llife campaign because the Division of Teaching and Learning has taken the time to work with every district and focus on what their math data results are and help them customize a plan for what they needed to do in their individual district. I think that’s made a huge impact.”

An area where state education officials like to brag is the state’s high school graduation rate. In the 2017-2018 school year, 89.4 percent of West Virginia high schools partially met standards for students graduating in four years. That number increased to 90.2 percent of high schools, moving from the yellow category to blue, meaning the schools were meeting graduation standards. The graduation rate for students taking five years had a small drop from 90.37 percent to 90 percent last year, but still stayed in the blue.

“Our graduation rates continue to be as high as anyone in the country, so we’re pleased about those results,” Paine said.

For example, Musselman High School in Berkeley County had 97.6 percent for its four-year graduation rate, earning it a blue mark for exceeding standards. Yet, Musselman’s post-secondary achievement rate was 49.9 percent and in the red for not meeting standards. Fairmont Senior High School in Marion County had a 93.6 percent four-year graduation rate, receiving a blue mark for meeting standards, but the high school had 32.5 percent for post-secondary achievement, putting it in the red.

For state school officials, it was the Balanced Scorecard’s attendance numbers that surprised them. The percentage of high schools not meeting standards for attendance increased slightly, with 75.86 in the 2017-2018 school year to 75.91 in 2018-2019.

“That is totally unacceptable and to me it’s appalling, and we need to do better,” Paine said. “I think we need to look at our accountability policy where we look at local school boards and we set the bar and say, here’s what you are accountable to do.”

While some of the gains between the first two years of the Balanced Scorecard were modest when compared statewide, state officials can see individual schools making improvements in the multiple indicators and categories. Blatt attributed much of this improvement to administrators, teachers, and parents being able to see where their school stands on the scorecard and started buckling down.

“Because they had received their Balanced Scorecard, they were able to actually dig into and see which of their schools and then which of their students at the school level really needed some additional support,” Blatt said. “I think this Balanced Scorecard allowed them to actually hone in on their weak areas, provide the supports that their students needed, and just really dig into holding everyone accountable for the results.”

For Paine, the Balanced Scorecard results means working with the state school board to develop additional policies to hold counties and schools accountable for their results and provide assistance to those schools.

“We need to talk about how we work with local school boards but step up our efforts once again to hold the districts accountable for performance,” Paine said. “It’s not an easy answer to a complex situation, but it’s a starting place. Local board members need to understand, you want to run for office? It’s not about buses, beans, and brooms anymore. It’s about abc’s.”