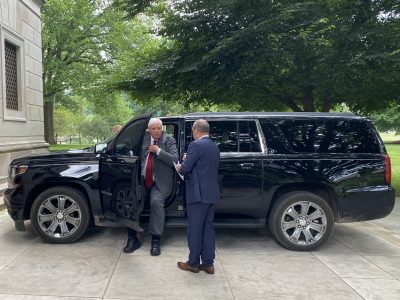 CHARLESTON — When the 2020 fiscal year ends Tuesday, West Virginia could still end up with a small surplus after sweeping state agencies for cash and utilizing excess Medicaid dollars.

Gov. Jim Justice announced Friday how the state plans to avoid a budget deficit due to the economic effects of the coronavirus shutdown of businesses in March, April, and May. He also announced the $1.25 billion sent to the state from the federal governor for coronavirus-related expenses will be used.

“In a year that looked like chaos beyond belief, from a cash standpoint we’re going to turn out a surplus,” Justice said. “It is amazing, but it’s not any more amazing than what West Virginians have done in every way…you’re knocking it out of the park, West Virginia, and you’re doing it very very well.”

Justice briefed the press about the plans Friday afternoon after unveiling plans to Republican and Democratic legislative leaders during a lunch at the Governor’s Mansion.

Lawmakers who couldn’t attend in person were able to participate by video chat.

The coronavirus pandemic forced Justice and state health officials to start shutting down some businesses in March, with a full shutdown of all non-essential businesses by executive order on March 23. The state also moved the income tax deadline from April 15 to July 15. According to officials with the state Department of Revenue, the state was projected to end the fiscal year with a deficit of $525 million based on estimates in April.

“It was really, really difficult and we had to try to figure out what in the world to do,” Justice said.

Due to better-than-expected tax revenue collections due to Justice’s phased re-opening plan which started at the end of April and continued through May, it’s estimated the state will end the fiscal year with a $285 million deficit.

“You never really closed,” Justice said. “The economic numbers had to be better than what we thought. What we did was close everything to protect you. We did that, but we kept our essentials running…we closed all the things we knew were important to protect you, but I knew all along that the engine was still running.”

By law, the state is prohibited form ending the fiscal year with a deficit. In order to fill that $285 million hole, the state swept money from the reserve accounts of executive branch agencies. The state also saw an increased match in federal Medicaid dollars, which allowed the excess Medicaid surplus to be used to fill the holes left by sweeping the agency accounts. The state was also able to free up money by using federal C.A.R.E.S. Act funding for reimbursement for coronavirus-related expenses.

When it’s all said and done, Justice said he expect to see at least a $10 million surplus as the state starts fiscal year 2021 on Wednesday, July 1 – all without using a nickel of the state’s Rainy Day funds.

“We’re going to have plenty of cash to go out to the end of the year no problem whatsoever,” Justice said. “We’ve used our reserves – not Rainy Day – and we have replaced our reserves 100 percent…we have replenished those dollars and lo and behold we’re going to cross the finish line on June 30 with a surplus.”

Justice said he also expects revenues for the first half of the new fiscal year to be better due to the new July 15 income tax deadline and a new federal coronavirus relief package that could include incentives for businesses to re-start and hire back workers.

Another $150 million will be set aside for a new grant program for small businesses that employee as many as 35 people. The grant program would give $10,000 to small businesses. Fairmont Regional Medical Center, which was converted into an emergency overflow hospital for help ease pressure on intensive care units should beds become unavailable, will get $10 million,

“We have the ensure the solvency of our unemployment fund,” Justice said. “The $287 million is dollars we had in place and now we’ve drained the fund dry. The $400 million is fir future claims between now and December 30th. We can do exactly just that.”

Justice hopes the states will receive relief for unemployment funds, which would free up part of the $687 million for other needs or future budget revenue backfill.

As well as the $1.25 billion, the state has received $971 million in other grants from the federal government during the coronavirus pandemic, including funding for the state’s rural hospitals, higher education and K-12 education.